Far Side of the Sea 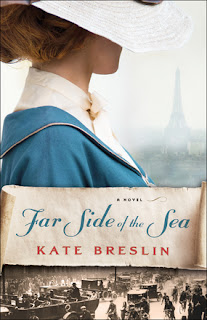 In 1918 England, Lieutenant Colin Mabry spends his days decoding messages for MI8 after suffering inures at the front.  When he receives an urgent summons by carrier pigeon from Jewel Reyer - a woman who saved his life and whom he believed to be dead - he can only hope he'll regain the courage he lost on the front lines as he's driven back into war-torn France.

But Jewel isn't the one waiting for him in Paris.  Instead, it is a stranger who claims to be her half sister, Johanna, who works at a dovecote for French Army Intelligence.  She found Jewel's diary and believes her sister is alive and in the custody of a German agent.  With spies everywhere, Colin is at first skeptical of Johanna, but as they travel across France and Spain, a tentative trust grows.

That trust is quickly put to the test, however, when their pursuit leads them straight into the midst of a treacherous plot and their search for answers quickly turns into a battle for their lives.

When I pick up a Kate Breslin novel, I know I can easily anticipate an intriguing story, fascinating war history, and complex characters.  Far Side of the Sea does not disappoint!  I had no idea how involved carrier pigeons were during World War I in the passing of messages within the military.  These courageous birds were able to fly undetected to deliver life-saving messages to their recipients.  It's always amazing to hear how even the smallest of creatures such as a bird can aid during wartime!

I really enjoyed the story and unfolding relationship that developed between Johanna and Colin.  They were brought together through a mutual concern over Jewel, and were equally surprised by the love that blossomed between them.  They are quickly pulled into a web of intrigue that threatens their very lives.  As enemy agents everywhere, it is impossible to know who they can trust and who to run from.  With many twists and turns, this story will keep you guessing until the end!