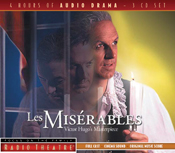 Back Cover
Les Miserables is one of the world’s masterpieces.  It enthralled audiences worldwide as a great novel…as a major motion picture…and as a blockbuster musical play.  Now, this mighty drama has been adapted as an epic production starring some of Britain’s finest actors.  True to Victor Hugo’s original novel, this grand production follows the tale of Jean Valjean as he encounters first the savage injustice of the law, and then the gentleness and grace of God.
Review
When I was kid, I was obsessed with the Adventures in Odyssey cassettes (yes, cassettes; not CDs, but cassette tapes!).  My siblings and I would listen to them over and over again, in the car, while doing chores, or at night before bed.  They were audio-dramas akin to watching a movie, except you had to paint the images in your own mind.  The stories were always exciting, and you really became attached to all the characters.
Les Miserables brought back all those sweet memories of Adventures in Odyssey.  Focus on the Family did a fabulous job in producing this story into radio drama - I absolutely loved it!  All the actors’ voices were brilliant, and the sound effects effortlessly brought the scenes to life.  And of course, the story itself is AMAZING.  It’s a beautiful story of mercy, forgiveness, sacrifice, and love.  If you haven’t listened to radio theatre before, this would be the perfect one to start with!
Tyndale House Publishers provided me with a complimentary copy of this audio-drama in return for an honest review. 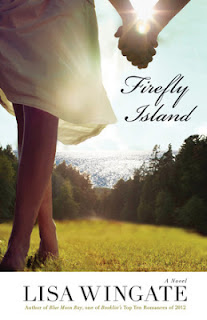 Back Cover
SOMETIMES LOVE TAKES YOU ON AN
AVENTURE COMPLETELY OFF THE MAP
Mallory Hale’s life quickly veers off course when she falls hopelessly in love.  After a whirlwind romance, Mallory finds herself leaving the bustle and action of Capitol Hill for the remote town of Moses Lake, Texas—with husband, stepson, and a U-Haul in tow.
A sweet, mishap-filled journey into marriage, motherhood, and ranch living ensues, and Mallory is filled with both the wonderment of love and the insecurities of change.  But what she can’t shake is the unease she feels around her husband’s new boss, Jack West.  Jack’s presence—and his mysterious past—set her on edge, and when hints of a scandal emerge, Mallory finds herself seeking answers…and comes to realize that the middle-of-nowhere home she wasn’t sure she wanted is the very place she’ll risk everything to save.
Review
It only took a few sentences to have me hooked on this book.  Lisa Wingate has a way of grabbing you, and pulling you into her novel, making you a part of the scenes and lives of the characters.  Her writing is impeccable and nearly poetic, as every word could be set to a beat, or a rhythm.  It is something I can’t fully describe, and is completely unlike what I have read before.
Her descriptions are extremely vivid, so you can imagine them in your mind to the smallest detail.  An example is below (found at page 97):

“Welcome to Moses Lake!  If you’re lucky enough to be at the lake, you’re lucky enough, the sign at the edge of town read.  Ancient-looking rock pillars supported the weathered wooden timbers, casting a shadow over the words and sheltering a spray of purple wildflowers.  Considering that it had been a fairly mild night, it was hot today.  Downhill from the sign, the waters of Moses Lake glittered in cheery patches between the trees.  Boats crisscrossed the twinkling surface, leaving foamy white trails.  Near the shore, docks of various vintages floated with brightly colored canoes, faded paddle-boats, and pontoon craft tugging at their leashes, eager to be released to the water.”

Her characters were rich, and very real.  There were real-life struggles and dramas portrayed throughout the novel, along with the small, sweet success that can be achieved when a family pulls together.  There is also a thread of intrigue woven through the pages, always niggling right below the surface, and never resolved until the final few pages.
This was such a beautiful, well-written novel, and I was greatly sorry to see it end.  Without a doubt I will be looking up Lisa Wingate’s other novels, particularly the preceding two novels in the series about Moses Lake, Larkspur Cove and Blue Moon Bay.  I HIGHLY recommend this read! 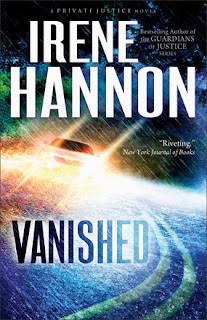 Back Cover
A tenacious reporter.
A skeptical PI.
And a secret that will SHATTER LIVES.
Reporter Moira Harrison is lost.  In the dark.  In a thunderstorm.  When a lone figure suddenly appears in the beam of her headlights, Moira slams on her brakes—but it’s too late.  She feels the solid thump against the side of her car before crashing into a tree on the far side of the road.
A man opens her door, tells her he saw everything, and promises to call 911.  Then the world fades to black.  When she comes to, she is alone.  No man.  No 911.  No injured person.  But she can’t forget the look of terror she saw on that face in the instant before her headlights swung away.  And she can’t get anyone to believe her story—except maybe the handsome ex-homicide detective turned private eye, who reluctantly agrees to take on the case.
As clues begin to surface, it becomes obvious that someone doesn’t want this mystery solved—and will stop at nothing to protect a shocking secret.
Review

As the back cover reads, Pulitzer-prize winning reporter, Moira Harrison, is heading back to her hotel on a dark stormy night when she shockingly runs into a woman on the road.  After a witness to the accident assures her he will call for an ambulance and check on the pedestrian Moira struck, Moira falls unconscious.  She wakes up alone, and more confused than ever.  When the police finally arrive, they are skeptical to her story as there is no body or witness(es).  Determined to find out where the woman and man came from (and where they went!), Moira turns to Private Investigator, Cal Burke, for help.
The mystery slowly unravels as Moira and Cal run down one lead after the other.  And through their searches, Moira and Cal find themselves drawn to each other in a way they never imagined.  But as the danger level is amped up, it leaves readers wondering:  are Moira and Cal being drawn together only to be drastically separated in their quest for the truth?

Irene Hannon does it again!  She has started off her new series, “Private Justice” with a novel drenched in mystery, suspense and threaded with romance.  The story only shells out one clue at a time to keep you guessing until the end.  The unique and multi-faceted characters flesh out the novel, and are just as interesting as the plot.  I love this new series and will be counting down the days to when the next book is released!
Book has been provided courtesy of Baker Publishing Group and Graf-Martin Communications, Inc.  Available at your favourite bookseller from Revell, a division of Baker Publishing Group.
Posted by ~ Jenna ~ at 21:29 No comments: 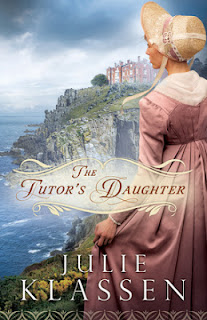 
Emma Smallwood, determined to help her widowed father when his boarding school fails, accompanies him to the cliff-top manor of a baronet and his four sons.  But soon after they arrive and begin teaching the two younger boys, mysterious things begin to happen.  Who does Emma hear playing the pianoforte at night, only to find the music room empty?  And who begins sneaking into her bedchamber, leaving behind strange mementoes?
The baronet’s older sons, Phillip and Henry Weston, wrestle with problems—and secrets—of their own.  They both remember the studious Miss Smallwood from their days at her father’s academy.  But now one of them finds himself unexpectedly drawn to her…
When suspicious acts escalate, can Emma figure out which brother to blame and which to trust with her heart?
Filled with page-turning suspense, The Tutor’s Daughter takes readers to the windswept Cornwall coast—a place infamous for shipwrecks and superstitions—where danger lurks, faith is tested, and romance awaits.


Emma Smallwood, teased as a “bluestocking” by her peers, loves her books.  With no means to travel the world, she has her own adventures through the reading of travel diaries, or history books.  She’ll read almost anything, if for nothing else but to gain knowledge on a subject.  She thrives on assisting her father in educating the boys under his tutelage.
One such boy, Phillip Weston, holds a special place in her heart.  He was always so kind to her while he and his brother Henry were attending Mr. Smallwood’s school.  The memory of Henry, on the other hand, only conjures up images of numerous pranks he pulled on her, or the merciless teasing against her and her love of books.
Now staying at the Westons’ residence, Emma is reluctant to realize that her heart has opened to one of the brothers.  She is forced to push that revelation aside, however, not only because she is a tutor’s daughter, and the Westons would never marry someone of her station, but also because of mysterious things that start occurring.  Several members of the household also appear to be withholding secrets, and potentially dangerous ones.  Something is amiss, and Emma is determined to get to the bottom of it.
Reading part like Jane Austen and part Liz Curtis Higgs, with a little Nancy Drew mystery thrown in, The Tutor’s Daughter is a winning novel.  It has all the wonderful moments of romance, the tingling sensations of mystery, and descriptions of beautiful scenery to imagine.  There were several twists and turns, and surprises that kept the story alive and exciting.  Many of the secrets I didn't find out until the very end, which inevitably, kept me in suspense for much of the novel!  I greatly enjoyed my own little adventure to the “windswept Cornwall coast”, and will be looking forward to Julie Klassen’s next novel.