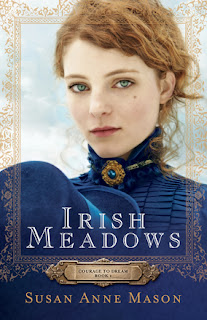 Brianna and Colleen O’Leary know their Irish immigrant father expects them to marry well.  Recently he’s put even more pressure on them insinuating that the very future of their Long Island horse farm, Irish Meadows, rests in their ability to land prosperous husbands.  Both girls, however, have different visions for their futures.

As the farm slips ever closer to ruin, James O’Leary grows more desperate.  It will take every ounce of courage for both sisters to avoid being pawns in their father’s machinations and instead follow their hearts.  And even if they do, will they inevitably find their dreams too distant to reach?

Wow.  If you want a story full of drama – look no further.  Reading Irish Meadows is like watching a reality TV series – there is no shortage of fights, tears, forbidden relationships, and strict parents, leading to one emotional outburst after the other.  The dicey situations the characters would get themselves into reminded me of the phrase, “Oh, what a tangled web we weave when we deceive…”

The constant drama made it difficult to put the book down because, of course, as the reader, you have to find out what’s going to happen next!  Who can put a book down when the sentence you just read leaves you hanging?

Irish Meadows is a promising start to the new “Courage to Dream” series.  I am looking forward to reading the continuation in the O’Leary family saga – which hopefully will come out sooner rather than later!

Book has been provided courtesy of Baker Publishing Group and Graf-Martin Communications, Inc.  This is my honest review.
Posted by ~ Jenna ~ at 17:21 No comments: 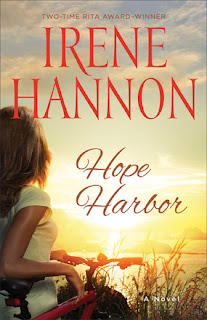 Tracy Campbell never wanted to leave Hope Harbor, Oregon, or the idyllic three-generation cranberry farm where she grew up.  But life – and love – altered her plans.  Now she’s home again – with a floundering farm to run…a tragic secret…and a wounded heart.  Romance is not on her agenda.  Nor is it on Michael Hunter’s.  The visitor from Chicago has daunting secrets and devastating regrets of his own.  But when Tracy recruits him to help with a project that is close to her heart, winds of change begin to sweep through Hope Harbor, bringing healing, hope, and love to countless lives – including their own.

Hope Harbor is a beautifully written romance from the amazing Irene Hannon.  With strong themes of hope, forgiveness, grace, and of course, love, Irene has penned a memorable tale about two people who are struggling to overcome tragic heartbreak, and end up finding hope in the Lord, and each other.  They both have secrets and mountains of guilt, and feel unworthy to ever be loved again.  Hope Harbor is a story that chronicles their journey of healing and redemption and reaffirms that even in the darkest hour, hope is never lost.

Book has been provided courtesy of Baker Publishing Group and Graf-Martin Communications, Inc.  This is my honest review.
Posted by ~ Jenna ~ at 17:19 No comments: