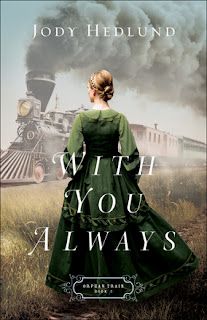 
One of the many immigrants struggling to survive in 1850s New York, Elise Neumann knows she must take action to care for her younger sisters.  She finds a glimmer of hope when the New York Children's Air Society starts sending skilled workers to burgeoning towns out west.  But the promise of the society's orphan trains is not all that it seems.
Born into elite New York society, Thornton Quincy possesses everything except the ability to step out from his bother's shadow.  When their ailing father puts forth a unique challenge to determine who will inherit his railroad-building empire, Thornton finally sees his chance.  The conditions to win?  Be the first to build a sustainable community along the Illinois Central Railroad and find a suitable wife.

Thrown together against all odds, Elise and Thornton couldn't be from more different worlds.  The spark that ignites between them is undeniable, but how can they let it grow when that means forfeiting everything they've been working toward?


With You Always is a heartrending story surrounding the extreme poverty and horrible conditions that beset many people in America in the mid-late 1800s.  It is tragic that some families worried about the very things we take for granted: clothing, shelter, food, personal safety, work, and family.  It was a time where parents were forced to make such difficult decisions as giving up their own children to asylums just so they wouldn't have to worry about whether their children would be fed and clothed.  Some children were outright orphaned and took the long train ride out West in hopes of being adopted by a loving family.  Some families provided wonderful homes for the orphans.  Others viewed the children as a form of free slave labor on their farms.

For men and women alike, the downward spiraling economy was not their friend.  Driven by power and money-hungry businessman whose only concern was their bottom line, the working class sunk deeper into poverty.  Settlements out in the West provided some hope of new jobs, and it is on this thread of hope that men would board the trains to a new town, and hopefully, a promising future.  With You Always rides on the hopes of orphans desiring a better future and the wealthy businessmen looking to make their next million.

The author, Jody Hedlund, has weaved a rich historical tale during this time that engages the reader from the first page.  I was drawn into Elise's story and appreciated the deep love she held for her sisters, and her determination to look after them.  The love story between her and Thornton is sweet and tender and was a real bright spot in the novel.  I look forward to reading the sequel!

Book has been provided courtesy of Baker Publishing Group and Graf-Martin Communications, Inc.
Posted by ~ Jenna ~ at 17:58 No comments: