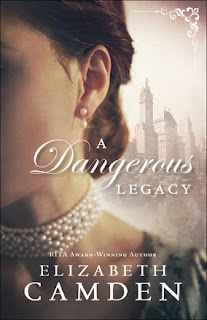 
Telegraph operator Lucy Drake is a master of Morse code and has made herself a valuable asset to the Associated Press news agency.  But the sudden arrival of Sir Colin Beckwith at rival British news agency Reuters puts her hard-earned livelihood at risk.  Colin is talented, handsome, insufferably charming - and keeping a secret that jeopardizes his reputation.
Despite their rivalry, Lucy can't deny that Colin has the connections she needs to give her family an edge in the long legal battle they've been waging over their rightful inheritance.  But when she negotiates an unlikely alliance with him, the web of treachery they dive into proves to be far more dangerous than they ever could have known.


What another great historical novel by Elizabeth Camden!  I'm always amazed by the depth of her research that she puts into each of her novels.  She picks such interesting topics to expound upon that it's like getting a history lesson at the same time (but in a good way!).  In A Dangerous Legacy, she expounds upon the rivalry between the Associated Press and Reuters, carrier pigeons, the world of telegraphs, insane asylums (believe it or not!), and Panama Canal.  She masterfully weaves all these different facets together to create a story that is immensely fascinating and difficult to put down.
As for the characters, Lucy is a spunky girl with a lot of pluck and determination.  She has a razor-sharp focus on winning a long-standing family court battle so that justice can be accomplished.  Her fierce devotion to her brother as well as her quick wit, has endeared her as one of my favourite heroines to date.
Colin is an affable British fellow who is tenacious and goal driven with his eyes firmly set on marrying a wealthy heiress to bring his family estate out of disrepair.  He truly has a "nose" for news, and enjoys reading the newspaper front to back - including the cricket scores.  I loved the fact that he raises carrier pigeons as it added a wonderful aspect to the story.
Together, Lucy and Colin make a smashing pair, trading insults, and are equally matched in their determination for their own pursuits.  As circumstances take dangerous turns, they are forced into an alliance that tests their budding friendship.  I greatly enjoyed reading their story and am looking forward to Lucy's brother's story, A Daring Venture - hopefully coming out soon!

Book has been provided courtesy of Baker Publishing Group and Graf-Martin Communications, Inc.
Posted by ~ Jenna ~ at 18:05 No comments:

The House on Foster Hill 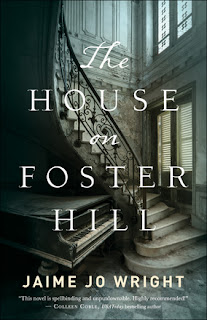 
Kaine Prescott is no stranger to death.  When her husband died two years ago, her pleas for further investigation into his suspicious demise fell on deaf ears.  In desperate need of a fresh start, Kaine purchases an old house sight unseen in her grandfather`s Wisconsin hometown.  But one look at the eerie, abandoned house immediately leaves her questioning her rash decision.  And when the house`s dark history comes back with a vengeance, Kaine is forced to face the terrifying realization she has nowhere left to hide.
A century earlier, the house on Foster Hill holds nothing but painful memories for Ivy Thorpe.  When an unidentified woman is found dead on the property, Ivy is compelled to discover her identity.  Ivy`s search leads her into dangerous waters, resurrecting painful memories and forcing a reunion with the man who broke her heart.  Can Ivy unravel the mystery and find a renewed hope before any other lives - including her own - are lost?
Review
A new author on the scene, Jaime Jo Wright, blasted through my expectations with a spine-tingling mystery.  Jaime has deftly written two tales that cross time periods with the "house on Foster Hill" bridging the gap.  There is plenty of drama, loads of intrigue, and many interesting characters fleshing out this story.  And because there are two stories, it also means double the romance - a huge win in my books!

When you first start reading, don't despair: the story may start as a slow simmer, but it gradually builds tension to an out-of-nowhere climax that explodes across the pages like a firecracker at a Fourth of July picnic.  Ivy lends herself as a complex character whereby grief and hopelessness weigh heavy on her shoulders.  Similarly, Kaine, struggles with feelings of self-doubt, guilt, and her own grief as she attempts to make a new life for herself, as well as atone for her past actions.  Combined, the two leading ladies also show courage and determination in getting to the bottom of the mystery surrounding the house on Foster Hill.

The House on Foster Hill is a novel not to be missed.  It has made my favourites list, and is one of the few stories I will definitely be reading again.


Book has been provided courtesy of Baker Publishing Group and Graf-Martin Communications, Inc.
Posted by ~ Jenna ~ at 17:33 No comments: