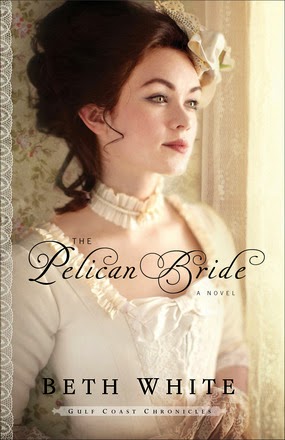 The Pelican Bride, by Beth White

She’s come to the New World to escape a perilous past.
But has it followed her to these far shores?

It is 1704 when Frenchwoman Genevieve Gaillain and her sister board the frigate Pelican bound for the distant Louisiana colony.  Both have promised to marry one of the rough men toiling in this strange new world in order to escape suffering in the old.  Genevieve knows life won’t be easy, but at least here she can establish a home and family without fear of persecution for our outlawed religious beliefs.

When she falls in love with Tristan Lanier, an expatriate cartographer-turned-farmer whose checkered past is shrouded in mystery, Genevieve realizes that even in this land of liberty one is not guaranteed peace.  Trouble is brewing outside the fort between the French colonists and the native people surrounding them.  And an even more sinister enemy may lurk within.  Could the secret Genevieve harbors mean the undoing of the colony itself?

What a delicious novel!  Full of rich history, sweet romance, and held together with a thread of danger, The Pelican Bride is the full package.

History has always fascinated me.  And more than just the history itself, but the people who lived it.  When I read about a historical event, I’m always wondering “What were the people thinking or feeling at that time?”  “Why did they make the decisions that they did?”  In The Pelican Bride, Beth White writes in an attempt to answer the questions surrounding the “mail order brides”, who went to Louisiane in search of new beginnings.  In my opinion, Ms. White couldn’t have done a better job.  She brought the time period to life with colourful characters and an intriguing storyline.  While “mail order brides” will always be a hot topic for romance novels, Beth White has definitely set her novel apart from others of the same genre.

Fascinating from beginning to end, I definitely enjoyed this read.  I can’t wait for book 2! 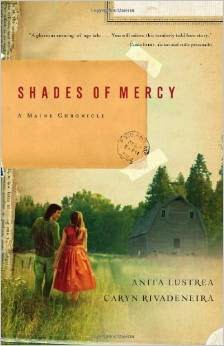 Shades of Mercy, by Anita Lustrea and Caryn Rivadeneira

Someday
…her father will see Mercy for the young woman she has become.
…Mercy and Mick can move their relationship out from the shadows.
…Mercy will leave Maine’s Northwoods for the world outside.

Although other parts of the country were changing, the Maliseets of Maine’s Northwoods were still relegated to shanties on the local garbage dump.  Those who found work were farmhands, not bosses.  And, of course, a Maliseet boy could never date the farmer’s daughter.  Not ever.

All of that began to change in 1954.  As racial tensions escalate, Mercy and her Maliseet boyfriend find it nearly impossible to hold on to their someday dream…then disaster strikes, looking surprisingly like the grace of God.

Shades of Mercy is set in a time not even a decade after World War II, where the world saw some of the worst evil man could ever be capable of with the attempt at the genocide of the Jews.  It was also a time of the beginning of the African-American Civil Rights Movement, the days of Martin King Luther Jr., and when American was turned upside down (again) in a push for all men to be seen as equal.

But also during that time was a rising awareness of the harsh treatment of the Maliseet Indians of Maine.  This tribe lived in conditions not fit for any human being, and were forced to do menial labour for low wages.

It is within this setting that the story picks up, following a young farm girl, Mercy, as she navigates this minefield of human emotion and actions while she herself is on the cusp of adulthood.  She can’t completely understand why she and Mick, a Maliseet Indian, can’t openly be a couple.  To her, they were a boy and a girl who liked each other.  Why was it such a big deal?  But one thing leads to another, and soon Mercy finds herself having to fight her hardest to for her and Mick, and the future they want together.

A moving story, Shades of Mercy is a novel that packs a big punch.  Illustrating the suffering that is caused by racism – something that affects people of every race, whether they are rich or poor, young or old, single, married, etc. – it is, at times, a heartbreaking, yet sweet, story, of a budding, forbidden love between two young people.

STAY TUNED: I will be hosting a giveaway for this novel.  More details to come!


River North provided me with a free copy of this book in exchange for this review which I freely give.
Posted by ~ Jenna ~ at 17:23 No comments:

For Such a Time 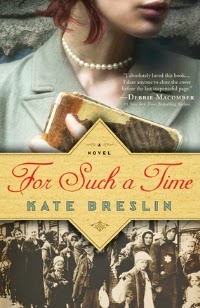 For Such a Time, by Kate Breslin

In 1944, Hadassah Benjamin feels abandoned by God when she is saved from a firing squad only to be handed over to a new enemy.  Pressed into service by SS Kommandant Colonel Aric von Schmidt at the transit camp of Theresienstadt in Czechoslovakia, her Aryan-like looks allow her to hide behind the false identity of Stella Muller.  However, to maintain her cover as von Schmidt’s secretary, she is forced to stand by as her own people are sent to Auschwitz.

Suspecting her employer is a man of hidden depths, Stella appeals to him on behalf of those in the camp.  Aric’s indulgence gives her hope even as she risks discovery with every attempt to help the prisoners.  When her bravery brings her to the point of ultimate sacrifice, she faces an excruciating choice.  God may have brought her to the camp for such a time as this, but how can she save her people when she cannot save herself?

I had such a hard time putting this book down!  With every life precariously hung in the balance and the tension thick and taut through each sentence, it kept me riveted to the pages, devouring each and every chapter until the final, dramatic end.

My heart broke along with Hadassah, through every trial she had to go through, and the pain she had to endure.  While this is a fictional story, it is placed during World War II, so the circumstances the Jews faced were very real.  It is hard to imagine having your family torn away from you, and watching your friends, neighbours, and fellow human beings treated no better than a disease that had to be eradicated.  And as my heart was breaking, I also felt the righteous anger that rose up within Hadassah.  She could not, would not, stand by and allow these innocent people being led like sheep to the slaughter.  She had to do everything she could to save them.

A moving and heart-pounding story, For Such a Time is certainly not forgettable.  And it is one that should not be missed.