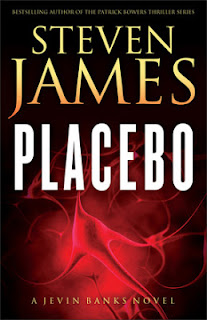 One man must uncover the TRUTH—
Even when others will stop at nothing to keep it BURIED.
While investigating a controversial neurological research program, expose filmmaker Jevin Banks is drawn into a far-reaching conspiracy involving one of the world’s largest pharmaceutical firms.  He seeks answers about the questionable mind-to-mind communication program—and answers to his own family tragedy.
Rooted in groundbreaking science, Placebo, explores the far reaches of science, consciousness, and faith.  This taut, intelligent, and emotionally gripping new thriller from master storyteller Steven James will keep you flipping pages late into the night.


This was easily one of the most anticipated novels on my “to be read” list.  I devoured Steven James’ gritty crime drama series, “Patrick Bowers Files” (and if you have not read them – you MUST pick one up!), and was sad to see them come to an end.  Imagine my elation when I found out that Mr. James was writing a new series!  Aptly entitled “The Jevin Banks Experience”, this series follows a former magician, and now exposé filmmaker, Jevin Banks, who seeks to pull the wool from peoples’ eyes regarding false psychics, televangelist con men, and fortune-telling scam artists.
Jevin and his faithful compatriots, Xavier, a conspiracy theory buff, and Charlene, a former assistant on his stage shows, are on a mission to blow open the new theory of mind-to-mind communication.  There are many players at work behind this new theory who have invested a lot time and money, so any attempts to dissuade or disapprove the science could be met with deadly force.
Given the plot lines for the novel, I have to say that I found it utterly fascinating.  Could two people who are emotionally “entangled” with each other, really affect the one another’s emotions, or even physical feelings?  For example, what is the explanation behind the inherent bond between twins, where sometimes when one feels pain, the other feels it at the exact same time, and in the same area(s) of the body?  How can they often discern each other’s thoughts and feelings – without even being in the same room?  The mysteries and complexities between a bond between twins is nothing new, but what is, is the idea that your thoughts can affect the thoughts of another, particularly those who are in a romantic relationship.
Telepathy has been an interesting and intriguing subject for many years in our culture.  Often, superheroes are given telepathic powers which would ultimately give them an “upper-hand” in fighting the enemy.  Further, the power of the brain has been the topic of many scientific discussions and studies and branches out to the power of positive thinking and visualization, techniques that are often used by professional athletes to help them attain their goals.
And on an even different track, recently, evidence has been revealed that suggest that individuals in vegetative states can communicate through measuring their brain activity.  (CBC News, “Canadian in ‘vegetative state’ communicates to scientists”) Whether or not that means we can one day communicate telepathically to one another remains to be seen, and may be an instance of connecting two dots that do not exist.
I apologize for digressing from a review of the novel itself, but needless to say, it provided much food for thought.  Whether or not it is to be taken literally, or just as a work of science fiction, is up to you.  Overall, I really enjoyed this field trip into the area of telepathy and must say that Mr. James has done it again in writing another riveting novel.  Too bad I have to wait nearly a year before the next one comes out… 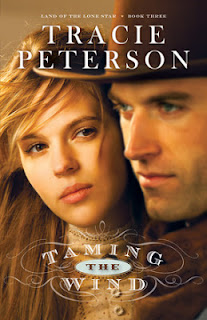 
Though grateful for the blessing of her daughter, Carissa Lowe has accepted that widowhood is her lot in life.  Bound by fear and mistrust, she feels incapable of opening her heart again.
Tyler Atherton has never forgotten Carissa.  When he discovers she’s living with her sister on a nearby ranch, his life becomes intertwined with the lovely widow’s.  And Carissa’s daughter, Gloria, seems determined to wrap herself around his little finger.  But while Tyler longs to provide a home and future for Carissa, he is haunted by an obligation he feels unable to fulfill.
Challenged by mounting hardships, can Carissa and Tyler preserve their fledgling love in a land as unforgiving and vibrant as the people who call it home?
Review
Carissa Lowe had a disastrous first marriage.  Now, widowed with a headstrong child of her own (that reminds Carissa so much of when she was younger…), Carissa’s sole purpose in life is to be a good mother to her daughter, Gloria.  Marriage is far from her mind as she cannot deny the feelings of mistrust towards men that prevents her from getting close to any man.  Any man except Tyler Atherton, that is.
Tyler finds Carissa very perplexing.  At one moment she is warm and friendly towards him, and the next she gives him the cold shoulder.  On the other hand, there is no denying Gloria’s feelings towards him – and he relishes the precious moments with the toddler.  But it’s Carissa’s heart he wishes to win over more than anything.  Before he could even think of committing to someone, however, Tyler is determined to find the Indians who viciously killed his father, and exact his own revenge.
Taming the Wind was a great, well-written novel, and I would say it is the best of the trilogy.  It intertwines tales of war and sorrow and brings it all together with messages of hope, forgiveness, and love.  The romance was sweet and it was wonderful to see two people grow in their faith and learn to lean on God, and trust in His goodness.
Postscript:  I had the privilege of reviewing the first two books in this trilogy (“Land of the Lone Star”), Chasing the Sun, and Touching the Sky.  Taming the Wind brings this trilogy to a very satisfying end.  While each book is stand-alone, I would definitely recommend reading the books in order, as the characters make recurring appearances throughout the trilogy.

A Change of Fortune 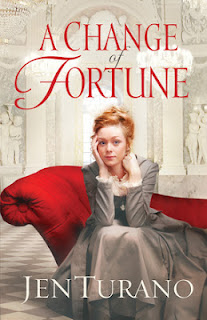 Back Cover
Lady Eliza Sumner is on a mission.  After losing her family, her fiancé, and her faith, the disappearance of her fortune is the last straw.  Now, masquerading as Miss Eliza Sumner, governess-at-large, she’s determined to find the man who ran off with her fortune, reclaim the money, and head straight back to London.
Much to Mr. Hamilton Beckett’s chagrin, all the eyes of New York society—all the female ones, at least—are on him.  Unfortunately for all the matchmaking mothers and eligible daughters, he has no plans to marry again, especially with his hands full keeping his business afloat and raising his two children alone.
When Eliza’s hapless attempts to regain her fortune put her right in Hamilton’s path, sparks instantly begin to fly.  The discovery of a common nemesis causes them to join forces, but with all their plans falling by the wayside and their enemies getting the better of them, it will take a riot of complications for Hamilton and Eliza to realize that God just might have had a better plan in mind all along.
Review
Lady Eliza has a plan:  find the people who stole her fortune and return to England.  She has many obstacles to overcome, however, and her fumbling attempts to gain information often land her in hot water.  It’s obvious she needs a sidekick or someone to help her locate her fortune, and the people responsible for its disappearance.
Mr. Beckett is fairly self-sufficient, and is not in need of anyone.  Except, maybe, a governess for his precocious children.  Lady Eliza smoothly integrates herself into his family, and upon discovering that they have a mutual enemy, they join forces to right the wrongs done to them.
Joined by one of Lady Eliza’s previous charges, an outspoken and headstrong young woman, and a chauvinist, arrogant private investigator, their investigations would undoubtedly be met with hair-raising escapades, nightly break-ins, and lots of laughter over the mixed results.
It’s been a long time since I laughed so much while reading one novel.  This is such a brilliantly written novel, and the dialogue is so witty that it kept me in stitches from chapter to chapter.  It is hard to believe that it is a first novel for Jen Turano, for it is so well-crafted.  I cannot wait for her next novel!
Book has been provided courtesy of Baker Publishing Group and Graf-Martin Communications, Inc.  Available at your favourite bookseller from Bethany House, a division of Baker Publishing Group.
Posted by ~ Jenna ~ at 17:38 No comments: