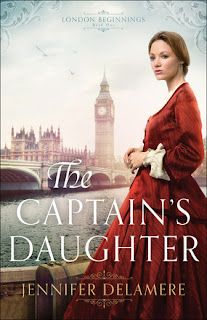 When a series of circumstances beyond her control leaves Rosalyn Bernay alone and penniless in London, she chances upon a job backstage at a theater putting on the most popular show in the city.  A talented musician and singer, she feels immediately at home and soon becomes enthralled with the idea of pursuing a career on the stage.  That is, as long as the shadows from her past don’t catch up with her.

After a hand injury forces Nate Moran from his army regiment in India, he returns home to London, a place that holds bitter memories.  He agrees to fill in temporarily as a stagehand while his brother recuperates from a broken leg, but Nate is counting down the days until he can rejoin his regiment.  His future is decided – until he meets a beautiful woman who has found a new lease on life in the very place Nate years to leave behind.

The historical novels that have been recently released from Bethany House have been fantastic so far!  The Captain’s Daughter is a wonderfully written story set in London in 1879 where family and jobs meant everything.  Without a respectable job, it was so easy to fall into poverty and hardship, and therefore being easily susceptible to persons with devious intentions.  Similarly to With You Always, after reading The Captain’s Daughter, it provided me with a newfound thankfulness for the blessings in my life…and more than one nudge to “pay it forward”.

One thing that also struck out to me in the novel was the wonderful cast of characters!  The friends that Rosalyn makes at the theater were all unique, eccentric, and highly entertaining.  Nate’s family was so warm and friendly, that you wished you could bring them to life.  I thoroughly enjoyed the engaging characters and hope many of them make appearances throughout the series.

The story had adventure, romance, intrigue, and a strong dose of drama.  It was a great well-rounded novel and I can’t wait for the next instalment!

Book has been provided courtesy of Baker Publishing Group and Graf-Martin Communications, Inc.
Posted by ~ Jenna ~ at 22:06 No comments: