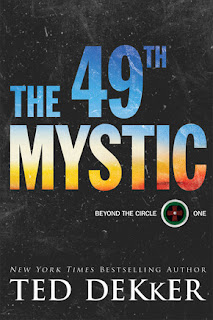 Back Cover
Some say the great mystery of how one can live in two worlds at once died with Thomas Hunter many years ago.  Still others that the gateway to that greater reality was and is only the stuff of dreams.
They are wrong.
In the small town of Eden, Utah, a blind girl named Rachelle Matthews is about to find out just how wrong.
When a procedure meant to restore Rachelle's sight goes awry, she begins to dream of another world so real that she wonders if Earth might be only a dream experienced when she falls asleep in that reality.
She is the prophesied one who must find and recover five ancient seals - in both worlds - before powerful enemies destroy her.  If Rachelle succeeds in her quest, peace will reign.  If she fails, both worlds will forever be locked in darkness.
So begins a two-volume saga of high stakes and a mind-bending quest to find an ancient path that will save humanity.  The clock is ticking:  the end rushes forward.
Ready?  Set?  Dream.
Review
It's been a loooong time since last read the riveting "Circle" series when the world was first introduced to Thomas Hunter, the man who slept on Earth and dreamed in another time and place - the land of the Scabs, Roush, and Shataiki.  A land where you had to die to truly live.  A place in which the battle between good and evil was very real.  It was a thrilling series, and if you have not read it yet, I highly recommend you do so!  So, it was with great anticipation that I awaited for The 49th Mystic in order to return back to this world.  Overall, I was not disappointed.
As there are two "Earths", there are two parallel stories, and both were equally exciting.  It did take me a few chapters to get into the story(ies) as there was a lot of laying the groundwork so readers who are not familiar with the Circle series would be comfortable diving into this book right away.  But once the story was underway, the suspense ramped up quickly, and I couldn't devour the pages fast enough.  Saturday morning last week I literally had to just sit down and read until the book was finished - I couldn't put it down!
Aside from the action packed scenes, there was a lot of meaty, heavy dialogue in the book.  At times it felt like a theological discourse in an abstract sort of way (think Jesus' parables) as Rachelle learns about the gravity of her mission, and the message she is to share with the world.  The dialogue was thought-provoking, and not something one could easily skim over.
I'm super happy to have had this opportunity to dive back into the Circle, and I truly cannot wait for the sequel!


Book has been provided courtesy of Baker Publishing Group and Graf-Martin Communications, Inc.
Posted by ~ Jenna ~ at 17:24 No comments:

A Chance at Forever 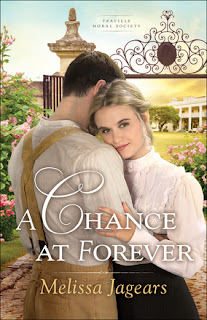 
Determined to protect the children of Teaville, Kansas, from the bullying she experienced as a child, Mercy McClain finds fulfillment working at the local orphanage and serving on the school board.  When Aaron Firebrook, the worst of her childhood bullies, petitions the board for a teaching position, she`s dead set against his getting the job.
Aaron knows he deserves every bit of Mercy`s mistrust, but he`s returned to his hometown a changed man and is seeking the forgiveness of those he wronged.  He doesn`t expect Mercy to like him, but surely he can prove he now has the children`s best interests at heart.
Will resentment and old wounds hold them back, or can Mercy and Aaron overcome the past in time to battle the threats against the future of the town`s orphans?

I was quite excited to dive back into the "Teaville Moral Society" series, having enjoyed the debut novel, A Heart Most Certain.  The newest novel in the series follows the tradition of a heartwarming romance carried by wonderful characters.

There was one slight departure in this story, however, by the inclusion of a darker element: bullying.  Bullying is something that has become highlighted more and more in society today as with the advance of technology so has the means and opportunities of bullying increased.  (I'm not saying technology is bad - just that some misuse it to harm others, which is aggravating and disappointing to say the least.)  But no matter the means or time period, bullying always has and always will leave a strong mark on the victims of it.  Everyone has a duty to step up and speak out if they see someone being bullied to ensure that the practice is not endorsed in any way, shape or form.

In the story, Mercy became the target of bullying because of a physical disfigurement.  Her main tormentor was Aaron Firebrook, which made me rather curious how the author, Melissa Jagears, would be able to turn him into a romantic love interest for Mercy.  How can one erase years of hurt and pain?  However, Melissa did the impossible and deftly pulled it off.  She crafted a wonderful and believable relationship between Mercy and Aaron that allowed Mercy to live up to her name, all the while pointing to the true source of grace and forgiveness - Jesus.

Postscript:  Generally, I wouldn't hesitate to recommend a Christian romance to high-school teen girls.  However, the bullying aside, there was an inclusion of another dark element to this book that would make me hesitate recommending it even to high-school aged children: sexual abuse against children.  Perhaps it would be best to have a parent read the novel first before deciding whether or not to allow their child to read it.


Book has been provided courtesy of Baker Publishing Group and Graf-Martin Communications, Inc.
Posted by ~ Jenna ~ at 17:00 No comments:

A Most Noble Heir 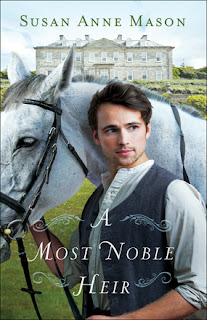 
When stable hand Nolan Price learns from his dying mother that he is actually the son of the Earl of Stainsby, his plans for a future with kitchen maid Hannah Burnham are shattered.  Once he is officially acknowledged as the earl's heir, Nolan will be forbidding to marry beneath his station.
Unwilling to give up the girl he loves, he devises a plan to elope - believing once their marriage is sanctioned by God that Lord Stainsby will be forced to accept their union.  However, as Nolan struggles to learn the ways of the aristocracy, he finds himself caught between his dreams for tomorrow and his father's demanding expectations.
Forces work to keep the couple apart at every turn, and a solution to remain together seems farther and farther away.  With Nolan's new life pulling him irrevocably away from Hannah, it seems only a miracle will bring them back together.


I really enjoyed this read!  The main characters are two honourable and extremely likeable people that make you yearn for their happy ever after as much as they do.  Nolan is a hardworking young man who wants to be able to look after his mother and sweetheart through his own means.  His dream is to become a farmer and raise a family.  But once his employer discovers that Nolan is his son, his dreams are thwarted at every turn as Lord Stainsby does everything in his power to mould Nolan into a nobleman's son - a son worthy to be called his own.
But Nolan is more like his father that anyone realizes.  For Nolan is stubborn, wilful, and at times, a bit rash.  And he will do everything in his power to ensure that he lives the life he desires - no matter the cost.
To describe this book in one word would be: riveting.  I had the most difficult time putting this one down!  Jane Austen and Julie Klassen fans alike will appreciate A Most Noble Heir.  This period drama is chock full of family tensions and secrets, long-held desires, and spurned affections.  Just when you think matters are going well, another twist and turn are thrown into the mix that sends the characters into a tailspin.  It was truly an excellent read - particularly how through it all, the characters learn to look God for direction, and cease leaning on their own strength.
Book has been provided courtesy of Baker Publishing Group and Graf-Martin Communications, Inc.
Posted by ~ Jenna ~ at 16:35 No comments: