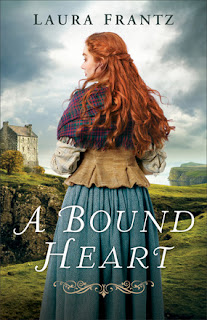 Though Magnus MacLeish and Lark MacDougall grew up on the same castle grounds, Magnus is now laird of the great house and the Isle of Kerrera.  Lark is just the keeper of his bees - and the woman who could provide an elixir to help his ailing wife conceive and bear him an heir.  But when his wife dies suddenly, Magnus and Lark find themselves caught up in a whirlwind of accusations, expelled from their beloved island, and sold as indentured servants across the Atlantic.  Can they make new beginnings in this New World?  Or will their hopes be dashed against the rocky coastline of the Virginia colony?

Laura Frantz's prose sparkles with authenticity as she digs into her own family history to share this breathless tale of love, exile, and courage in colonial America.

Sigh.  What a sweeping and swoon-worthy story!  Full of drama, hardships, forbidden love, and desperate circumstances, A Bound Heart swept me off my feet and kept my head in the clouds.  Set in the oft-romanticized setting of Scotland full of brawny men, fair maidens, and an awe-inspiring landscapes with sandy shores and rocky cliff sides that get beaten by storm-tossed waves...

...Yes, I may have fallen in love with Scotland through the reading of this novel and dearly hope to explore its beautiful land and rich history someday!

Back to the story...the characters in the novel become as storm-tossed as the sea itself as through a series of terrible events, Magnus and Lark are forced to leave all that they know and love to undertake a dangerous sea crossing to an unknown life in a wild and untamed country.  They struggle to hold fast to their faith and the budding affections between them for strength.  At times it appears their very lives are doomed, and I, as a reader, devoured every word breathlessly until the last page.

A Bound Heart was a fantastic read, of which I'll be revising very soon as reading it just once isn't enough! 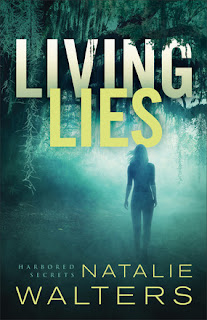 In the little town of Walton, Georgia, everybody knows your name - but no one knows your secret.

At least that's what Lane Kent is counting on when she returns to her hometown with her five-year-old son.  Dangerously depressed after the death of her husband, Lane is looking for hope.  What she finds instead is a dead body.

Lane must work with Walton's newest deputy, Charlie Lynch, to uncover the truth behind the murder.  But when that truth hits too close to home, she'll have to decide if saving the life of another is worth the cost of revealing her darkest secret.

What a great first novel in a new series, "Harbored Secrets"!  Complemented by a wonderful, and very likeable, cast of characters, Living Lies is a suspenseful mystery that will keep you guessing until the very end.  Natalie Waters has crafted a story combining all my favourite elements: suspense, mystery, and romance.  She does an excellent job at keeping the "who" and "why" under wraps until the climax, making it difficult to put the book down!

One of the other central themes to this novel is what society often considers a "taboo" topic: depression.  Depression is very real and affects more people that one would realize.  It is more than likely that everyone knows someone who has struggled with depression.  Natalie Waters handled the topic very tactfully, and gave a strong emphasis on how much we need to be there for our friends and loved ones, be an example of Jesus love through thick and thin.

With such a great start to a new series, I'm super excited to know that the second book is coming out very soon - November 2019!  Some fall/winter reading to look forward to!