No Other Will Do 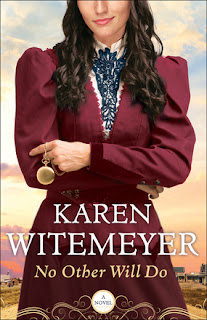 
She trusts him for the job, but can she trust him with her heart?

Men are optional.  That was the credo Emma Chandler's suffragette aunts taught her and why she established Harper's Station, a women's colony that offers a fresh start to females in need.  But when a dangerous and shadowy assailant tries repeatedly to drive the women out, Emma is forced to admit they might need a man after all.  One who can fight.  And there is only one man she trusts enough to ask.

Malachi Shaw has finally earned the respect hes always craved by becoming an explosives expert for the railroad.  Yet when Emma's telegram arrives, he rushes back to Texas to repay the girl who once saved his life.  Only she's not a girl any longer.  She's a woman with a mind of her own and a smile that makes a man imagine a future he doesn't deserve.

As the danger intensifies, Emma, Mal, and the ladies of Harper's Station must choose safety or whether to risk everything to fight for their future.

Karen Witemeyer's newest book is another excellent western tale invoking the elements that fans of the author have come to love:  humour, romance, interesting plot, a strong heroine, and a male lead akin to a knight in shining armor.  And in this particular novel, there is an added element of danger coupled with a thread of mystery as the characters try to determine who is the villain.  Is is someone from one of the ladies' past?  Someone who just doesn't want to see the women succeed?  Or is there a traitor in their midst?

No Other Will Do follows a tried and true plot:  a knight in shining armor sets out to rescue a damsel in distress, except this knight is wearing plaid and sporting dynamite instead of a sword, and the damsel is a mayoress of her own town with a head for "figures" instead of a kingdom's princess looking forward to the next ball.  But despite the familial plot structure, the story itself is unique, making my little foray into Harper's Station an enjoyable experience.  As this is the start of a new series for Karen Witemeyer - "Ladies of Harper's Station" - there will be more trips in my future to Harper's Station: one that I greatly look forward to.


Book has been provided courtesy of Baker Publishing Group and Graf-Martin Communications, Inc.
Posted by ~ Jenna ~ at 20:21 No comments: 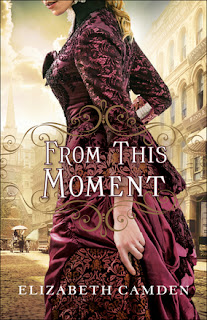 Stella West's artistic talent made her the toast of London, but when her beloved sister dies under mysterious circumstances she abandons everything and heads for Boston.  With single-minded determination she fights to pierce the ring of secrecy surrounding her sister's death.  Upon meeting Romulus White, a publisher with connections into every important power circle in the city, she quickly realizes he could be a valuable ally in navigating Boston society.

Romulus has been pursuing Stella for years to create art for his magazine.  Her luminous illustrations are the missing piece he needs to propel his magazine to the forefront of the industry, and he will stop at nothing to get her on board.

Sparks fly at the instant they join forces, but Romulus is unsettled by the unwelcome attraction he feels toward Stella, fearing she might be the one woman who could disrupt his hard-won independence.  He may have finally met his match in Stella, but is helping her solve the mystery of her sister's death worth the risk to his publishing empire?

I really loved this novel.  The story was great, an intriguing mystery entrenched in story rich with historical detail.  But the real stars of the show in this book was not the plot, nor the setting, but the characters.

Stella is bold and brash - unequivocal in her opinion of herself and handles relationships much like a bull navigating a china shop.  She is amusing and highly talented - and meets her match in the form of Romolus who equals her tenacity and self-confidence, a man who is passionate about everything and attacks projects with fervor (even if only for a short period of time).  His lack of attention span is something Stella compliments in her single-minded focus on issues.  As iron sharpens iron, these two characters buffets the others' weaknesses and embolden their strengths.  It is truly one of the greatest character matches I've read.  The two aren't polar opposite and neither are they exactly like the other.  But they mesh so well, bringing life to the story and themselves so much so I half-expected them to jump off the page and take real-life form in front of me.

From this Moment was well-written and left me wanting more.  Highly recommend!


Book has been provided courtesy of Baker Publishing Group and Graf-Martin Communications, Inc.
Posted by ~ Jenna ~ at 20:01 No comments: 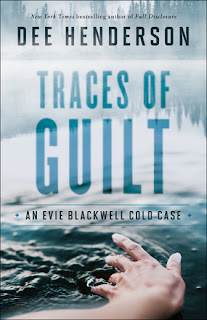 Evie Blackwell loves her life as an Illinois State Police detective...mostly.  She's very skilled at investigations and has steadily moved up through the ranks.  She would like to find Mr. Right, but she has a hard time imagining how marriage could work, considering the demands of her job.

Gabriel Thane grew up in Carin County and is now its sheriff, a job he loves.  Gabriel is committed to upholding the law and cares deeply for the residents he's sworn to protect.  He too would like to find a lifetime companion, a marriage like his parents have...

When Evie arrives in Carin, Illinois, it's to help launch a new task force focused on unsolved crimes across the state.  She will work with the sheriff's department on a couple of its most troubling missing-person cases.  As she studies old evidence to pull out a few tenuous new leads, she unearths surprising connections.  One way or another, she knows Gabriel Thane and his family will be key to the answers she seeks.

Some books I start reading, get a few pages in (or not even that far), and start bemoaning the fact that I picked up the book in the first place (I never not finish a novel - unless the content itself is really questionable).  Other books, upon reading the first few pages, I get a silly grin on my face, and I wiggle a little deeper into the couch as I know - just know - it's going to be a *good* read (and start bemoaning the fact that the story has to come to an end!).

Traces of Guilt falls into the latter category.  It truly showcases some of Dee's best writing, and is easily one of my favourite novels of hers to date.  The character depth, the multi-faceted story, and the intriguing mystery all result in one knockout novel (and take into consideration that I was already mentally writing this review when I was a few chapters into the book - it was that good from the get-go!).  Dee brings back the Falcons, who have been staple supporting characters over the past few novels.  I found the inclusion of them, particularly Ann, really help anchor the story as a presence of a consistent character who really seems to know everybody.  It allows the transitioning from character to character to run smoothly as Ann is the "middle-woman" (for a lack of better term) and brings everyone together.

I'm so happy to see that Traces of Guilt is the start of a new series, centered around Evie Blackwell.  Evie is a vibrant and tenacious character that I really would like to see more of.  Of course, the rest of the characters, including the Thane family, are equally interesting and admirable with their intense loyalty, deep maturity, strong faith, and steadfast love for one another.  Can't wait for the next installment!


Book has been provided courtesy of Baker Publishing Group and Graf-Martin Communications, Inc.
Posted by ~ Jenna ~ at 19:33 No comments:

A Heart Most Certain

A Heart Most Certain, by Melissa Jagears
Back Cover
Lydia King knows what it’s like to be in need, so she joins the Teaville Moral Society hoping to help the town’s poor.  But with her father’s debts increasing by the day and her mother growing sicker by the week, she wonders how long it will be until she ends up in the poorhouse herself.  Her best chance at a financially secure future is to impress the politician courting her, and it certainly doesn’t hurt that his mother is the moral society’s president.  Lydia’s first task as a moral society member – to obtain a donation from Nicholas Lowe, the wealthiest man in town – seems easy…until the man flat-out refuses.
Despite appearances, Nicholas wants to help others but prefers to do it his own way, keeping his charity private.  When Lydia proves persistent, they agree to a bargain, thought Nicholas has a few surprises up his sleeve.  Neither foresees the harrowing complications that will arise from working together, and when town secrets are brought to light, this unlikely pair must decide where their beliefs – and hearts – truly align.
Review
Throughout reading this story, the one thing that kept coming to mind was Pride and Prejudice.  For as Mr. Darcy and Lizzy Bennett had to overcome their own shortcomings – particularly a prideful countenance for one and a judgmental outlook for the other, so do Lydia King and Nicholas Lowe.
Nicholas, in endeavoring to keep his charity work secret, was in fact trying to shield himself from the perceived self-righteous individuals in his church.  He desired to avoid their anticipated scorn and condemnation over his choices of charitable patrons.  But in doing so, he alienates himself from everyone as he automatically believes that all Christians are self-righteous and not willing to help the “least of these”.
Lydia, despite her sweet character, discovers that she holds a healthy amount of prejudice towards the more unsavory individuals in society.  While she is willing to call out their sins and unlawful deeds, she is not so willing to show empathy towards their situation.  She backs off of trying to directly assist in making their lives better and pulling them out of the dire straits they are in.  She doesn’t like to be made uncomfortable and be in direct contact with the poorest of individuals.
A Heart Most Certain provided an interesting character study.  Self-righteousness and prejudice are two flaws that often are thrown at the church and/or individual believers.  One must remember that we all are sinners and have shortcomings – we will never be perfect on this side of heaven. As Nicholas and Lydia are to learn, we should also strive to have a heart open to seeing our shortcomings followed by a willingness to change.
I greatly enjoyed A Heart Most Certain¸ the debut novel for Melissa’s new series, “Teaville Moral Society” (note:  there was also an e-novella released, Engaging the Competition, prior to this book), and will be looking forward to the next addition!


Book has been provided courtesy of Baker Publishing Group and Graf-Martin Communications, Inc.
Posted by ~ Jenna ~ at 12:34 No comments: