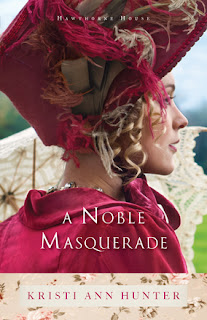 
Lady Miranda Hawthorne acts every inch the lady, but inside she longs to be bold and carefree.  Approaching spinsterhood in the eyes of society, she pours her innermost feelings out not in a diary but in letters to her brother’s old school friend, the Duke of Marshington.  Since she’s never actually met the man, she has no intention of ever sending the letters and is mortified when her brother’s mysterious new valet, Marlow, mistakenly mails one of the letters to the unsuspecting duke.

Shockingly, this breach of etiquette results in a reply from the duke that soon leads to a lively correspondence.  Insecurity about her previous lack of suitors soon becomes confusion as Miranda finds herself equally intrigued by Marlow, a man she has come to depend upon but whose behaviour grows more suspicious by the day.  As the secret goings-on at her family’s estate come to light, one thing is certain:  Miranda’s heart is far from all that’s at risk for the Hawthornes and those they love.

Make room bookshelves everywhere!  A new regency series has hit the market, and if A Noble Masquerade is any indication, it’s going to be a FANTASTIC series.

A smashing debut, A Noble Masquerade quickly propelled itself near the top of my favourites list.  Full of rich historical detail, A Noble Masquerade invites the reader into upper society where mansions, balls, elegant dresses, noblemen and husband-hunting mothers abound.  Intrigue and danger surface in the novel as it is discovered that some characters aren’t what they appear to be.

The biggest theme is a tantalizing romance as Lady Miranda Hawthorne finds herself torn between the Duke of Marshington and her brother’s valet, Marlow.  One would be the best she could ever hope for in her fast-approaching spinsterhood, and the other would be well beneath her “social position”.  Who will she choose?

Peppered with humour and held together by a cast of wonderful characters, A Noble Masquerade is a novel I won’t soon forget.  I can’t wait for the next instalment in the “Hawthorne House” series!

Book has been provided courtesy of Baker Publishing Group and Graf-Martin Communications, Inc.  This is my honest review.
Posted by ~ Jenna ~ at 21:21 No comments: 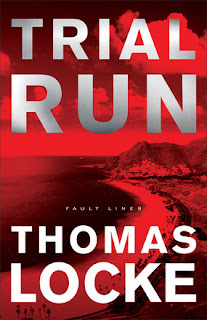 
Dr. Gabriella Speciale has assembled an international team of elite scientists with one goal in mind—to create and control out-of-body experiences that transcend the limits of time and space.  Reese Clawson’s mind-bending experiments aim to explode the boundaries of human consciousness—and annihilate the opposition in the process.

When a terrifying discover and a string of failed tests threaten to dismantle both programs, the key to survival may reside in the mind of a gifted grad student whose unsettling dreams have thrust him into the center of a dangerous battle for control.

As the threads of perception and reality become tangled and time itself twists in unexpected directions, one warning remains clear:  what you don’t know can kill you.

If you’re a frequent reader of my blog, you know that I love suspense novels.  It is definitely my favourite genre.  I was greatly interested in reading Trial Run, the first in the new series, “Fault Lines”, by one of my new favourite authors, Davis Bunn (who also has the pen-name, Thomas Locke).  As you can tell by the description on the back cover, the premise was interesting and unique, and guaranteed a bit of action, so I was ready for a fast-paced, breathless read.

However, as I started reading the book, I quickly became lost in the frequent scientific jargon and lengthy explanations behind the “out-of-body experiences” and “mind-bending experiments”.   At times, the heavy scientific dialogue between characters started to feel too much like reading a textbook.   I can appreciate needing a strong and believable theory(ies) for a sci-fi novel in order to capture your audience’s attention and convince them there is the slightest possible chance that “this could work!”  However, the deep and technical explanations and suppositions were just too much for me, often flying right over my head, and leaving me disconnected from the story.

On the plus side, the cast of characters in Trial Run was widely varied and just plain fantastic.  With their different nuances and the hints of their (often) dark backstories, Davis Bunn created a very intriguing lot of individuals to help round out the story.  I hope that many of them, particularly Charlie and Gabriella, make appearances in future novels in the series as they contributed quite a bit to Trial Run.

Don’t get me wrong – as mentioned earlier, I’ve become quite the fan of Davis Bunn, having recently read The Patmos Deception and Emissary (the sequel to Emissary is coming out in January!).  But this time, unfortunately, Trial Run didn’t quite hit the ball out of the park for me.

Book has been provided courtesy of Baker Publishing Group and Graf-Martin Communications, Inc.  This is my honest review.
Posted by ~ Jenna ~ at 21:20 No comments: 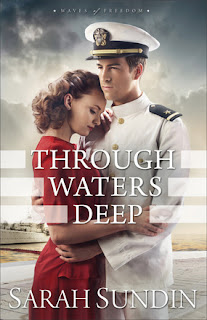 It is 1941 and America teeters on the brink of war.  Handsome and outgoing naval officer Ensign Jim Avery escorts British convoys across the North Atlantic in a brand-new destroyer, the USS Atwood.  On shore, Jim encounters Mary Stirling, a childhood friend who is now an astute and beautiful Boston Navy Yard secretary.

When evidence of sabotage on the Atwood is discovered, Jim and Mary must work together to uncover the culprit.  A bewildering maze of suspects emerges, and Mary is dismayed to find that even someone close to her is under suspicion.  With the increasing pressure, Jim and Mary find that many new challenges – and dangers – await them.

I devoured Nancy Drew, Hardy Boys, and Trixie Belden books growing up.  They were just classic mysteries wherein the end of each chapter left you hanging on a climatic note, and the authors did a pretty good job of keeping you guessing until the final page. I have amassed quite a collection over the years, and still today, if I discover a book in a thrift store that I don’t have, I usually purchase it to read for old-times sake (and add to the collection, of course!).

Mary Stirling references her love for Nancy Drew mysteries in Through Waters Deep, and the story held some delightful similarities to the classics.  Combining old-fashioned sleuthing and a healthy dose of “what-ifs”, Mary Stirling sets out to discover the saboteur in their midst.  Jim is a willing accomplice to her escapades and enthusiastically supports her ideas and suggestions.  Along the way, romance is kindled between the two of them, but is soon threatened when an old crush shows up, adding yet another dynamic to the story.

With a mix of history, suspense, mystery, romance, and values of stepping out boldly in faith and conquering your fears, Through Waters Deep is winning read that will appeal to a wide variety of readers.  This is a another series that I will be keeping tabs on for when the next book comes out!

Book has been provided courtesy of Baker Publishing Group and Graf-Martin Communications, Inc.
Posted by ~ Jenna ~ at 15:44 No comments: