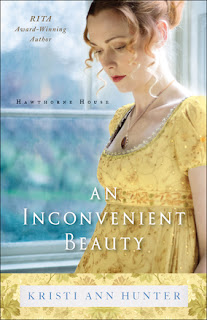 Griffith, Duke of Riverton, likes order, logic, and control, so he naturally applies this rational approach to his search for a bride.  While he's certain Miss Frederica St. Claire is the perfect wife for him, she is strangely elusive, and he can't seem to stop running into her stunningly beautiful cousin, Miss Isabella Breckenridge.

Isabella should be enjoying her society debut, but with her family in difficult circumstances, she has no choice but to agree to a bargain that puts her at odds with all her romantic hopes - as well as her conscience.  And the more she comes to know Griffith, the more she regrets the unpleasant obligation that prevents her from any dream of a future with him.

As all Griffith's and Isabella's long-held expectations are shaken to the core, can they set aside their pride and fear long enough to claim a happily-ever-after?

I have been eagerly anticipating An Inconvenient Beauty, which encapsulates the story of Griffith, the oldest sibling of the Hawthornes.  Well, to be honest, anticipating, and also dreading, as with this story, it spells the end of the Hawthorne House series, a series I have been thoroughly enjoying from the first novel, A Noble Masquerade.

Kristi Ann Hunter has brilliantly written another unforgettable historical treat.  Griffith's character was everything I was hoping him to be: the tall, strong, silent type who measures his words and actions to the utmost detail.  It is because of his more stoic, commanding personality that he requires a bit more fun in his orderly life...enter Isabella who has a knack for causing Griffith to laugh and appreciate the small things around him.  And while their personalities may be different, there is a trait that they share in common: a strong sense of duty towards their family's well-being.  While admirable, it is also the one thing that threatens to keep them apart...

With many appearances from the series' past beloved characters, An Inconvenient Beauty was a joy to read.  The interactions were at times highly amusing, and the story did not disappoint.  I'm sad to say goodbye to the Hawthorne House series, but know it is one that I will revisit many times.  In the interim, I will be eagerly awaiting Kristi's next masterpiece!

Book has been provided courtesy of Baker Publishing Group and Graf-Martin Communications, Inc.
Posted by ~ Jenna ~ at 12:08 No comments: 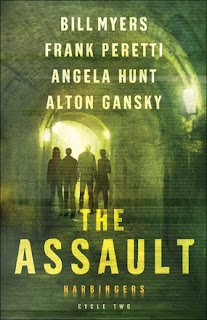 In Invitation, four beloved and bestselling suspense authors introduced supernaturally gifted characters on a race to stem the tide of growing evil.  Now Bill Myers, Frank Peretti, Angela Hunt, and Alton Gansky return with the next cycle of fast-paced and riveting tales.

In Bill Myers's "The Revealing", the team finds themselves in Rome trying to retrieve the mystical spear HItler once stole.  The task will take them from hidden chambers inside the Vatican to a mysterious seaside cave with unexpected and dangerous powers.

Frank Peretti's "Infestation" tells of a microscopic plauge unleased on the world that deceives, blinds, kills, then spreads and kills again.  The Harbringers team must confront this faceless evil bent on seducing and destroying humankind.

In "Infiltration" by Angela Hunt, a seaside respite intended to buy time for the wounded team turns deadly when misplaced trust leads the Harbingers into dangerous waters.

Alton Gansky's "The Fog" reveals a supernatural mist unlike any other, filled with vicious monsters that kill whatever they find.  When one team member realizes the only way to stop the fog is to enter it, the ultimate sacrifice must be made.

Draw the curtains and hide under the blanket covers with a baseball bat and a flashlight - the Harbringers are back!  And with it, another set of four dark, twisted, and suspenseful stories that will make your skin tingle and your hair to stand up on end.

I can't add anything to the back cover's synopsis of each story, but wanted to touch on the authors' writing itself.  With this many authors involved in one piece of work (albeit, they still write four separate stories), I was initially worried that the stories would be stilted and choppy as the authors write each other' character(s).  I'm happy to say that while the authors each have their own unique voice, they do a superb job of staying true to each character's personality, making the flow from story to story seamless.

Each story was creepy and tense (and very good!), my "favourite" this time around was Alton Gansky's "The Fog".  He plays on what has got to be one of the scariest types of nightmares whereby a thick rolling fog is full of man-eating monsters out for blood.  It was a story that had my toes curling and flipping the pages as fast as I could to find out what happens next!

This series reminds me of dark chocolate - dark and intense, yet incredibly addicting and oh, so good.  The next book can't come soon enough!

Book has been provided courtesy of Baker Publishing Group and Graf-Martin Communications, Inc.
Posted by ~ Jenna ~ at 12:04 No comments: 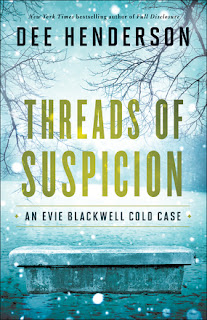 Eve Blackwell's reputation as a top investigator for the Illinois State Police has landed her an appointment to the governor's Missing Persons Task Force.  With so much public fanfare surrounding the launch of this elite investigative team, the political stakes are high, and the team will have to produce results - and quickly.

Evie and her new partner, David Marshal, are assigned to a pair of unrelated cases in suburban Chicago, and while both involve persons now missing for several years, the cases couldn't be more different.  As Evie opens old wounds in a close-knit neighbourhood over the disappearance of a college student, David searches for a private investigator whose last case involved a high-powered client.

With a deep conviction that "justice for all" truly matters, Evie and David are unrelenting in their search for the truth.  But the questions that lie just beneath the surface in Evie's personal life are also begging for answers.

Dee Henderson has crafted another top-notch mystery in this sequel to Traces of Guilt.  Evie is now on her second case involving the Missing Persons Task Force and it is an equally as twisting and mind-boggling as her first.  While I've always had a strong appreciation towards those in the criminal justice system, The "Evie Blackwell Cold Case" series has given  me an even higher esteem for the detectives who work long, exhausting hours in their search for truth and justice.  And sometimes, despite the countless hours and research, a case is never solved - leading to disappointment and heartache not only for affected family members and friends, but understandably, also for the law enforcement who worked the cases.  It's sad we live in a world whereby law enforcement is needed, but I'm so grateful to those who take that career path in efforts to make the world a better place.

In all of Dee Henderson's crime novels, she approaches the subject matter with tact and respect.  Her main characters - (the good guys) - are always these amazing men and women that are rather awe-inspiring.  I've really enjoyed Evie's character so far - she's strong, intuitive, yet has a hint of vulnerability that makes her feel more relatable!  (haha)  In Threads of Suspicion, there were hints at some secrets in Evie's past that I'm hoping will be delved into more deeply in the next story.  The introduction of David Marshal made for a wonderful counterpart to Evie's character and his backstory brought even more depth to the novel.

As a side note: one of Dee's trademark styles a lot of dialogue to develop the characters and plot.  It makes for a slower read, yet still highly engaging at the same time.  This isn't a fast-paced novel with multiple points of conflict, but the type that simmers along building tension until it hits the major explosive climax.  All in all, Threads of Suspicion was a great read that has my fingers already itching to hold the next instalment!


Book has been provided courtesy of Baker Publishing Group and Graf-Martin Communications, Inc.
Posted by ~ Jenna ~ at 11:56 No comments: