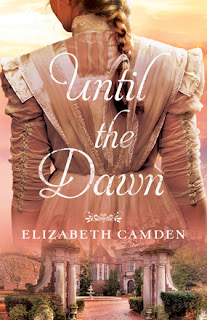 Fascinated by Dierenpark, an abandoned mansion high atop a windswept cliff in the Hudson River Valley, Sophie van Rijn sees no harm in setting up a roof-top weather station for her work with the newly established Weather Bureau.  While the villagers are suspicious of the mysterious estate and its tragic history, Sophie has come to see it as her own enchanted piece of paradise.

The first Vandermark to return to the area in sixty years, Quentin intends to put an end to the shadowy rumors about the property that has brought nothing but trouble upon his family.  Ready to tear down the mansion, he is furious to discover Sophie trespassing on his land.

Instantly at odds, Quentin and Sophie yet find common ground when she is the only one who can reach his troubled son.  There's a light within Sophie that Quentin has never known, and a small spark of the hope that left him years ago begins to grow.  But when the secrets of Dierenpark can no longer be kept in the past, will tragedy triumph or can their tenuous hope prevail?

Have you ever sighed after reading the last page of a book?  Sighed because it was such a wonderfully written novel and the characters had somehow ingrained themselves into your heart so that it felt like a real "goodbye" when you finished their story?

That's how I felt when I read the final word in Until the Dawn.  I have read several books by the talented Elizabeth Camden, and I have yet to be disappointed.  She has a knack for creating a strong cast of leading characters to draw the reader into the story.  Sophie and Quentin are as opposite of individuals as one could imagine - one is bright, warm, and sunny in nature whose main passion in life, besides being a blessing to others and living out her faith, is having a climate observatory established in town and being able to work there.   The other character is a dark, brooding skeptic hounded by pain from an injury, guilt over his relationship with his former deceased wife, and driven by the need to repay his grandfather and raise his son to be self-supporting.  With two such opposing personalities, fireworks - and not the good kind - are guaranteed to follow.  But what becomes rather surprising is over the course of time, mutual admiration and respect for each other blossom - along with perhaps something else more intimate?

But romance isn't the only side to this story.  Locals call the beautiful Dierenpark Estate cursed and plagued by problems from the moment it was built.  Indeed, it holds more secrets than one could ever imagine, bringing an intriguing angle to the book.  Threaded together with Elizabeth Camden's fantastic writing, Until the Dawn is just a fantastic read that I would highly recommend - along with her other excellent novels.

Book has been provided courtesy of Baker Publishing Group and Graf-Martin Communications, Inc.
Posted by ~ Jenna ~ at 20:18 1 comment:

The Shock of Night 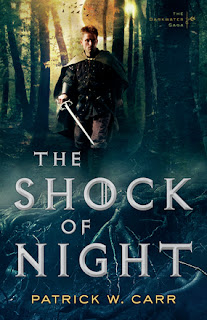 When one man is brutally murdered and the priest he works for mortally wounded, Willet Dura, reeve to the king of Bunard, is called to investigate.  As he begins to question the dying priest, the man pulls Willet close and screams in a foreign tongue.  Then he dies without another word.

Willet returns to his task, but the clues to the crime lead to contradictions and questions without answers, and his senses are skewed.  People he touches appear to have a subtle shift, as though he can divine their deepest thoughts.  In a world divided between haves and have-nots, gifted and common, Willet soon learns he's been passed the rarest gift of all - a gift that's not supposed to exist.

Now Willet must pursue the murderer still on the loose in Bunard even as he's pulled into a dangerous conflict that threatens not only his city, but his entire world--a conflict that will force him to come to terms with his inability to remember how he escaped the Darkwater Forest - and what happened to him inside it.

Wow, this was a fantasy novel unlike any others that I've read!  It's not your typical fantasy about witches, spells, dragons, etc.  It reads like a medieval mystery story, with the added element of "gifts" given to mankind - and one in particular is quite supernatural.

The main character, Willet Dura, is a reeve to the king, in what I would describe as similar in scope to a homicide detective.  He's called when there's been a murder, and it is up to him to question witnesses and find the culprit.  He is an interesting character for while he holds what one would think is an esteemed position, he is scorned by the society in general, and has many enemies at court.  Perhaps not helping his reputation is his strange fascination with death - so much so, he will attend the kingdom's "hospice" when an individual is near the end, wanting desperately to know what the dying person "sees", and if there is truly a hereafter.  The one thing he truly lives for, however, is his love, Gael, and he looks forward to their impending wedding with no small amount of eagerness.

With a complex main character, it is by necessity that the story be equally elaborate.  Indeed, it is intricate, and multi-layered, and as Willet goes about his investigation into the deaths of the priest and his guard, each new clue he discovers just leads to more questions than answers.  When he is granted a gift of sight into a person's mind, it becomes a blessing and a curse.  For with it, a person's guilt can be determined with a simple touch.  However, it is a gift equally fiercely protected and sought after, thereby endangering Willet's life more than ever before.

The Shock of Night is guaranteed to keep the reader enthralled until the final page is read - and wishing desperately there was at least one more chapter!