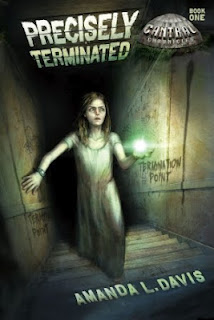 With microchips implanted in their skulls at birth, the slaves of Cantral and Cillineese have laboured under the tyrannical rule of the nobles and their computers for centuries.  Monica, a noble who avoided the implanting and escaped a death sentence at the age of four, is now sixteen and is in hiding.  She lives with the slaves inside the walls of the Cantral palace, pretending to be one of them while the slave council plots a way to use her chip-less state to destroy the all-powerful computers that strike down any hint of rebellion.
The fate of millions rides on Monica's shoulders.  As the only chip-less person in the world, she must find a way to destroy the computers and free Cillineese from the nobles' iron fist before they strike with the ultimate punishment--death for everyone inside the city walls.
Review
Precisely Terminated is a debut novel from young Amanda L. Davis, the daughter of Bryan Davis, who himself is the author of the “Dragons in our Midst” series.
This novel follows Monica, a noble turned wall slave, who escaped from being implanted with a computer microchip when she was only four years old.   In the cities of Cantral and Cillineese, microchips are implanted in every human being.  Powerful computers monitor each person’s microchip, and thereby each and every step a person takes for the rest of their lives.  For the nobles, it is ensuring they stay within the boundaries of their city walls.  But for the slaves, it ensures that they follow a strict daily routine: breakfast, work, lunch, work, supper, bath, and finally sleep.  If the slaves are not on schedule, or in a place that it not within their work area, (i.e. in a library when they should be cleaning a noble’s bedroom) the chip will give off powerful shocks increasing with intensity, ending with a final deadly shock.
As Monica is without a chip, she is the only hope that the slaves have of ever being able to shut down the computers and free the slaves from the nobles’ rule.  What follows is a twisty maze of events Monica embarks on her quest to find the computers and shut them down.
I confess that I haven’t read much by way of dystopian novels, the only ones being the widely popular “Hunger Games” trilogy (which I quite enjoyed), so I wasn’t sure what to expect when I cracked open Amanda’s book.  In many areas, I was pleasantly surprised.  Amanda has her own unique writing voice and style, and it is very consistent throughout the novel.  She has a wonderful imagination and an eye for detail.  I did feel, however, that Monica’s character could have been a little less antagonistic – it felt like she was constantly bickering and complaining to the other characters, and it got rather tiresome to read. You could call Monica a bit of a “reluctant heroine” by the way she viewed her mission.
That being said, Precisely Terminated is a fine debut novel for Amanda L. Davis, and shows a lot of promise.  I wouldn’t hesitate to recommend Precisely Terminated to youth readers interested in a little sci-fi/dystopian drama.


Book has been provided courtesy of Foundation Distributing, Inc and Graf-Martin Communications, Inc.  Available at your favourite bookseller from AMG Publishers.
Posted by ~ Jenna ~ at 21:43 No comments: 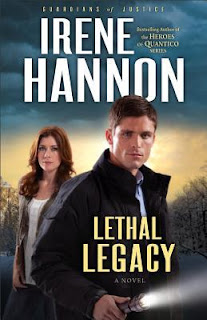 Back Cover
A determined daughter...
A skeptical detective...
A deadly secret...
The police say her father's death was a suicide.  Kelly Warren says it was murder--and she has new evidence to prove it.  Detective Cole Taylor doesn't put much credence in her claim, and nothing in his case review suggests foul play.  But when he digs deeper and discovers startling information linking her to a long-buried secret, the danger escalates.  Is history repeating itself?  And who wants Kelly silenced?
Review
Lethal Legacy follows commercial artist, Kelly Warren, on her quest to get the truth behind her father’s sudden and unexpected death.  The police have ruled it a suicide, as for all intents and purposes, that’s exactly what it looks like.  However, Kelly knows her father, and is certain that he would never, ever do such a thing.  Five months after his death, new evidence surfaces, which Kelly hopes will be enough to reopen her father’s case file.
Detective Cole Taylor chalks the new evidence up to simple coincidences, and believes the matter is open and shut.  He is far more interested in the striking redhead who brings in the evidence.  However, he is strict about mixing business with pleasure and does his best to keep his feelings at bay.  When an attempt on Kelly’s life happens, everything changes.  Suddenly all things are not as they appear.  Committed now to protecting Kelly Detective Taylor will do whatever it takes to get the real story behind her father’s death.
Book three in the “Guardians of Justice” series, Lethal Legacy is a book that has it all.  Romance, suspense, riveting plot, and high-octane action.  In the two days it took  me to read this novel, it proved very hard to put down.  Irene Hannon has perfected a great recipe for novels, as proven by the two previous books in the series (which I proudly own and display on my bookshelf), and her other series, “Heroes of Quantico”.  I could say with almost complete certainty that you would be guaranteed a good read with any novel that Irene writes.  Do not miss this novel! 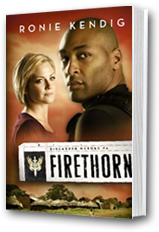 Back Cover
Former Marine and current Nightshade team member Griffin Riddell is comfortable.  So comfortable he never sees the setup that lands him in a maximum security prison, charged with murder.  How will he ever prove his innocence stuck behind iron bars?

Covert operative Kazi Faron is tasked with reassembling Nightshade.  She's convinced whoever set up the fugitive also dissected the black ops team.  But breaking Griffin out of a federal penitentiary amid explosive confusion may turn out to be her last assignment, because Kazi has a secret - and it could get everyone killed.

As Kazi and Griffin race to rescue the others and discover the traitor, love awakens in their hearts.  Can a covert operative and the felon she's freed overcome their mutual distrust long enough to save Nightshade?  Will anything prepare them for who - or what - is coming?

I seriously devoured this book.  In two work and horseback riding-filled days.  It made me late for work at least once, and caused me to stay up late each night to finish that "one more chapter".

What made this novel so good to me?  The characters were real and well developed.  They were multi-faceted as characters should be, because that's what we are as humans!  You felt their emotions as easily as if they were your own, and truly cared for them.
The story was non-stop excitement from the first page.  Ronie's familiarity with the military is clearly evident in this book and gives a sense of realism to each scene.

It is by far one of the best novels I have read this year.  The saddest thing about finishing the novel was that it was the last one in this amazing series - "Discarded Heroes".  I can't wait for the next novel from Ronie!
Posted by ~ Jenna ~ at 07:30 2 comments: