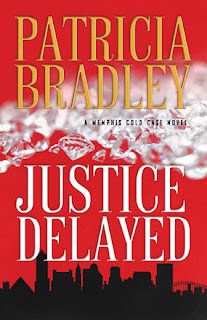 
Eighteen years ago, TV crime reporter Andi Hollister's sister was murdered.  The convicted killer sits behind bars, his execution date looming.  But when a letter surfaces stating that the condemned didn't do the crime, Detective Will Kincaide of the Memphis Cold Case Unit will stop at nothing to help Andi get to the bottom of it.  After all, this case is personal:  the man who confessed to the crime is Will's cousin.  Andi and Will must find the real killer before the wrong person is executed.  But what can happen in only a week?  Uncovering police corruption, running for your life, and, perhaps, falling in love?

Justice Delayed is a classic "who-done-it" story with multiple rabbit trails, many different suspects,  and a hero/heroine who won't rest until justice is served.

Driven to find the truth, Andi Hollister is a tenacious investigative reporter who doesn't let threats or trouble stop her from getting her story.  Her actions at times bring others around her into dangerous situations, so much more so when she starts digging into her sister's murder.  Detective Will Kincaide, who is equally determined (but perhaps more level-headed), reluctantly teams up with the fireball Andi to search for the truth together.  He is just as invested in clearing is cousin's name, but as his attraction for Andi grows, he is hesitant to put Andi in danger, often pitting the two at odds with each other.

Trouble falls quickly on the heels of each new revelation as Andi and Will pull back the layers of the past to get to the bottom of the mystery once and for all.  As sparks of romance begin to fly between the two main characters, Andi and Will have to decide whether a relationship between them is something worth pursuing - at the risk of potentially damaging their long-standing friendship should the relationship fail.  Another angle is introduced to the story as one of the characters in the book struggles with an addiction to narcotics.  The story of addiction for the character was an eye-opener in showing how someone can so easily, so simply, come to rely too heavily upon pain medication.  Of course, the results of the addiction can be devastating, and it serves as a reminder that we can never be too careful in using heavy painkillers.

Justice Delayed was an intriguing story that I enjoyed reading.  I'm looking forward to Andi's brother's story in Justice Buried, set to come out later this year!

Book has been provided courtesy of Baker Publishing Group and Graf-Martin Communications, Inc.
Posted by ~ Jenna ~ at 21:30 No comments: 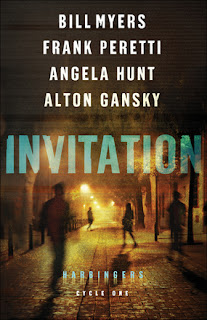 
Four strangers with gifts they don't understand.
A world falling into darkness.
This is Harbingers.

You're invited on a journey of suspense and the supernatural as four of your favourite bestselling authors team up for a unique series.

From the minds of Bill Myers, Frank Peretti, Angela Hunt, and Alton Gansky, Invitation compiles the first four episodes of "Harbingers", each following a different character.

Brenda - the street-hustling tattoo artist who sees images of the future.
The Professor - the atheist ex-priest ruled by logic.
Andi - the professor's brilliant but geeky assistant who sees inexplicable patterns.
Tank - the naive, big-hearted jock with a surprising connection to a healing power.

Brought together for the first time in "The Call", the four soon realize pockets of darkness are emerging throughout the world.  Whether it involves a mysterious house, the unexplainable death of animals around the world, or an otherworldly little girl, each puzzle they solve brings them closer to the ultimate explanation of what's happening.  But will they discover the truth in time?


Close your windows.  Lock your doors. Check under your bed and look in your closet.  Then curl up in your favourite chair with some (calming) tea before cracking open Invitation.

The first book in the new "Harbingers" series, Invitation is a collective effort by well-known authors, Bill Myers (his Forbidden Doors series gave me the shivers as a teen), Frank Peretti (the Christian fiction world wouldn't be the same without This Present Darkness and Piercing the Darkness), Angela Hunt (while not of the suspense genre, her "Heirs of Cahira O'Conner" series is one of my favourites), and Alton Gansky (Distant Memory was one of the first books that hooked me to the suspense genre).  The story revolves around four, and sometimes five, different (and quirky) individuals who all have unique gifts, several of which are on the supernatural side.  While it's a modern day setting, I felt immersed in an entirely different world!  In each novella, they encounter some strange otherworldly experiences that require each of their special gifts to overcome.  Intriguing doesn't begin to describe the stories.  Full of suspense, a heavy dose of creepiness, and a smattering of sassy dialogue, Invitation was a great collaborative effort.

In the introduction to the book, the authors write that one of their "rules" to writing this book was to write it like a TV series, with each author's story akin to an episode.  From there, depending on the response and demand of Invitation, it would then be decided whether further "episodes" would be written.  PLEASE do write more.  I haven't read a book as fast as I've read this one in a long, long time.

Book has been provided courtesy of Baker Publishing Group and Graf-Martin Communications, Inc.
Posted by ~ Jenna ~ at 21:43 No comments: 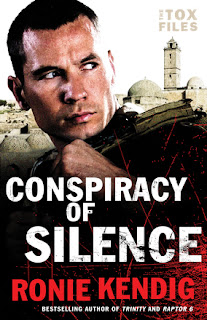 
This is the way the world ends.


Four years after a tragic mission decimated his team, Cole "Tox" Russell has been disavowed by the United States.  And that's fine - he just wants to be left alone.  But when a dormant, centuries-old disease is unleashed, Tox is lured back into action.

Tox and his former Special Forces team regroup to work with FBI deception expert, Kasey Cortes, and fiery archaeologist, Tzivia Khalon, to search the globe for answers - and a cure.  As the mission leads from one continent to another, it becomes clear they're not just fighting a plague but battling an ancient secret society whose true goals remain hidden.

With time running out and the threat of a global pandemic rising, Tox and his team realize their sole chance might be to reach back through centuries of silence to find the only answer that can save them all.


In her signature style, Ronie Kendig has crafted a fast-paced thriller packed with strong heroes and heroines, danger, intrigue, and sparks of romance.  Each chapter is filled with an onslaught of action as the characters race against time to stop a plague from wiping out civilization.  I was a little surprised at the "doomsday" plot as it is a bit of a departure from Ronie's previous works that I've read, but it is nonetheless a story that captures the reader's attention from the first to the last page.  I enjoyed the intertwining of Biblical themes and an Old Testament event as it made the situations and threats showcased in Conspiracy of Silence feel even more plausible.  I'm excited that this book is a start of a new series, and will be eagerly looking forward to subsequent novels.

Book has been provided courtesy of Baker Publishing Group and Graf-Martin Communications, Inc.
Posted by ~ Jenna ~ at 21:15 No comments:

The Innkeeper of Ivy Hill 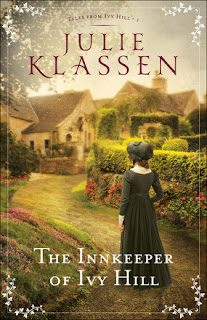 
The lifeblood of the village of Ivy Hill is its coaching inn, The Bell.  When the innkeeper dies suddenly, his genteel wife, Jane Bell, becomes the reluctant landlady.  Jane has no idea how to manage a business, but with the town's livelihood at state and a large loan due, she must quickly find a way to save the inn.

Despite their strained relationship, Jane turns to her resentful mother-in-law, Thora, for help.  Formerly mistress of The Bell, Thora is struggling to overcome her losses and find purpose for the future.  As she works with Jane, two men from her past vie for her attention, but Thora has promised herself never to marry again.  Will one of them convince her to embrace a second chance at love?

As pressure mounts from the bank, Jane employs new methods, and puzzles over the intentions of several men who seem to have a vested interest in the place, including a mysterious newcomer with secret plans of his own.  With the help of friends old and new, can Jane restore life to the in, and to her empty heart as well?


The Innkeeper of Ivy Hill is another beautifully written story by Julie Klassen.  Julie takes her time developing her characters, fleshing out their personalities to make them so real they could jump off the page.  The story itself was a little bit slower than her previous novels, but still well written with a historical setting that felt very authentic.   There were multiple relationships showcased throughout the story, romantic and family alike, which makes me eager to read the sequel.  Another well-done historical novel!


Book has been provided courtesy of Baker Publishing Group and Graf-Martin Communications, Inc.
Posted by ~ Jenna ~ at 20:51 No comments: