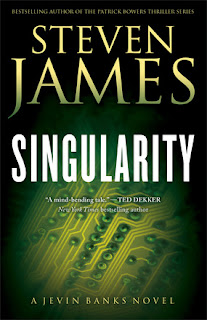 Back Cover
Jevin Banks is searching for a killer—
And answers to terrifying questions he never even thought to ask.
When his friend is murdered, illusionist Jevin Banks is determined to find out what really happened.
Drawn deep into a web of conspiracy and top-secret research on human consciousness, Jevin won’t stop digging until the truth is revealed.  Soon he uncovers a dark secret that could change the very fabric—and future—of human life on the planet.
Based on frightening scientific realities and bristling with mystery, suspense, and intrigue, Singularity is the riveting sequel to Placebo.
Review
In this book, Steven James writes that “magic is the only honest profession” as magicians promise to deceive you, and they succeed.  But Mr. James is also an honest guy as he promises a crazy, suspenseful ride, and pulls it off each and every time.
Singularity takes you through a complex web of mystery, robotics, the search for eternal youth, government secrets, and desperate people willing to do anything to get the answers they need.  And at the centre of it is Jevin Banks, a man still recovering from a family tragedy, and who is suddenly thrust back into an emotional roller coaster ride.
Singularity was a thrilling tale, and in my opinion, was even better than its predecessor, Placebo.  Fingers crossed that there will be another instalment in this series!