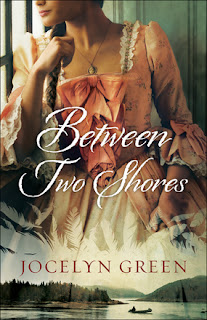 She has always moved between worlds, but now she must choose a side.

The daughter of a Mohawk mother and French father in 1759 Montreal, Catherine Duval would rather remain neutral in a world tearing itself apart.  Content to trade with both the French and the British, Catherine is pulled into the Seven Years' War against her wishes when her British ex-fiance, Samuel Crane, is taken prisoner by her father.  Samuel claims he has information that could help end the war, and he asks Catherine to help him escape.

Peace appeals to Catherine, even if helping the man who broke her heart does not.  But New France is starving, and she and her loved ones may not survive another winter of conflict-induced famine.  When the dangers of war arrive on her doorstep, Catherine and Samuel flee by river toward the epicenter of the battle between England and France.  She and Samuel may impact history, but she fears the ultimate cost will be higher than she can bear.

Oh boy.  What a read!  I love, love Jocelyn Green's historical fiction.  The detailed research she undergoes for each novel is widely evident from the first page.  I'm always blown away by the intricacies of her plots and the depth of her characters.
Set in my native country of Canada, Between Two Shores takes place during a very turbulent time in Canadian history as the French and British fought over who would control the territory.  The French enlisted the help of many of the Mohawk warriors in their fight against the British, even going so far as to pay for the scalps of British immigrants who called the area their home.  The British were equally brutal in their battle tactics in their massacres of Indian villages.  Thus went on the bitter Seven Years' War which divided many families and friends and decimated numerous lives.
As set out in the back cover description above, Between Two Shores centres around Catherine Duval, a strong woman caught between two cultures - two different peoples she calls her own.  As she tries to maintain relationships with one side, the other suffers.  She feels like a nation divided, not unlike her native country at the time.  As such, Catherine tries her best to be neutral, both in the war, and in her own life.  But in the end, no one can remain completely neutral.  A side must be chosen, and each chapter in the novel leads up to the climatic question: Which side will it be?
Encapsulating the tension of the time, Jocelyn Green crafted a riveting novel that was difficult to put down.  It was full of heartache and despair, war and trauma, and yet held together with a thread of hope.  Hope for humanity in the middle of a wretched war, hope for fractured relationships, and hope in a heavenly Father who holds the whole world in His hands.


Book has been provided courtesy of Harvest House and Graf-Martin Communications, Inc.
Posted by ~ Jenna ~ at 12:41 No comments: