Murder at the Courthouse 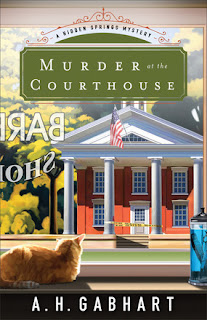 Michael Keane’s stressful days as a Columbus police officer are done.  He’s ready to relax into his new position as deputy sheriff in his hometown.  Nothing ever happens in Hidden Springs, Kentucky—and that’s just fine with Michael.

Nothing, that is, until a dead body is discovered on the courthouse steps.  As Michael works to solve the case, it seems that every nosy resident in town has a theory.  When the sheriff insists Michael check out one of those harebrained theories, his surprising discover sends him on a bewildering search for a mysterious killer that has him questioning everything he has ever believed about life in Hidden Springs.

Bringing with her a knack for creating settings you want to visit and an uncanny ability to bring characters to life, A. H. Gabhart pens a whodunit that will keep you guessing.

I’m a fan of A. H. Gabhart (a.k.a. Ann H. Gabhart), having read most of her “Rosey Corner” and “The Heart of Hollyhill” series, and one of her stand-alones, Words Spoken True.  She is a beautiful writer who creates deep characters, interesting and unique stories, and wonderful “small towns”.

Murder at the Courthouse has the guaranteed cast of memorable characters, a quaint small town (where you can tell the time of day depending on when the town’s resident “busybody” is on her daily tour through town), but with an added element of a dastardly and brazen murder in broad daylight.  As is wont in small towns whereby a small thing like the barber going on vacation is known by everyone, anything larger than that creates an impact.  And suffice to say, a murder rocks Hidden Springs’ residents to the core.

While their own safety is chief among their concerns, the townspeople also want to know who did it so justice can be served.  And as the conspiracy theories grow faster than the weeds in their backyard vegetable gardens, they are every bit as gnarly.  Enter Michael Keane, who must wade through the “helpful” suggestions to get to the bottom of the matter.  To make things even more complicated, there is a reporter on his tail, an arrogant police officer spearheading the investigation, a teenage boy that is constantly chasing after trouble, and two very different women in his life that he is equally drawn to.  But solve this case he must – and will – even if the answer isn’t what he wants it to be.

With more twists and turns than a back-country road, Murder at the Courthouse is a mystery that keeps you guessing until the culprit is revealed – and holds the reader captive throughout the whole process. 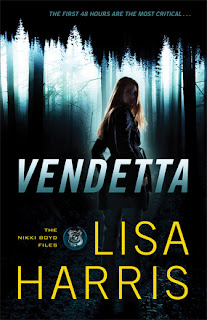 No one needs to push Nikki Boyd to excel on the Tennessee Missing Persons Task Force.  The case of her own missing sister, still unsolved after ten years, is the driving force in her work.  When a Polaroid photo of a missing girl shows up at the crime scene, Nikki quickly recognizes similarities to the past.  The closer she gets to the abductor, the more she feels this case has become personal, and she is not the hunter…but the hunted.

With this explosive first book in The Nikki Boyd Files, award-winning author Lisa Harris takes you on a fast-paced pursuit of justice that will have you holding your breath until the heart-stopping finish.

If you’re looking for an edge-of-your-seat thriller and a fast-paced read, look no further than Vendetta.  Employing the tactic of making the characters’ situation worse when the story even slightly slows down, Lisa Harris ensures that you will be late for work, have fewer hours of sleep, and be constantly wondering “what could possibly happen next?!” in her well-crafted crime novel.  It’s an adrenaline ride as the Nikki desperately tries to find a missing girl, whilst stumbling upon a possible connection to her own sister’s disappearance – something that Nikki is still struggling with guilt over.  But Nikki is determined – and with her team and loyal friend, Tyler, by her side, she won’t rest until the case is solved and the missing girl is safe.

This novel was a fantastic read.  I will be eagerly awaiting book two in the Nikki Boyd Series – due out in summer of 2016!

Book has been provided courtesy of Baker Publishing Group and Graf-Martin Communications, Inc.
Posted by ~ Jenna ~ at 19:03 No comments: 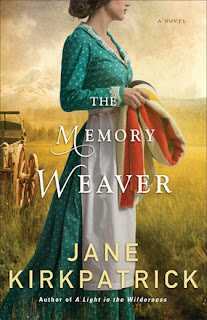 Eliza Spalding Warren was just a child when she was taken hostage by the Cayuse Indians during a massacre in 1847.  Now a mother of two, Eliza faces a new kind of dislocation; her impulsive husband wants to make a new start in another territory, which will mean leaving her beloved home and her mother’s grave—and returning to the land of her captivity.

Haunted by memories and hounded by struggle, Eliza longs to know how her mother dealt with trauma of their ordeal.  As she searches the pages of her mother’s diary, Eliza is stunned to find that her own recollections tell only part of the story.

Based on true events, The Memory Weaver is New York Times bestselling author Jane Kirkpatrick’s latest literary journey into the past, where threads of western landscapes, family, and faith weave a tapestry of hope inside every pioneering woman’s heart.  Get swept up in this emotional story of the memories that entangle us and the healing that awaits us when we bravely unravel the threads of the past.

It always blows me away when I read stories about frontierswomen – they could practically take on anything.  They weren’t worried about whether their Starbucks drink was low-fat, stressed when they broke a nail, or squeamish over doing housework.  These women were strong in every sense of the word, and equally admirable.  They did what they had to in order to survive - many relying on their faith to see them through.

Eliza Spalding Warren was one of those women.  She survived a horrific tragedy when she was young, but instead of letting it defeat her, she soldiered on.  Eliza grew up fast, marrying a man quite a few years older than her, and soon had her own children to raise.  I found her very courageous as she met each new challenge head on, even while she struggled with reoccurring memories of her captivity, a difficult father, and a restless husband.

This is not a fast-paced novel, but rather asks the readers to take a breath, slow down, and allow yourself to be carried away in a tale of loss, love, struggle, courage, and hope.  Rich in setting, history, and characters, The Memory Weaver is a story sure to stick in the minds of readers days after finishing the final page.

Book has been provided courtesy of Baker Publishing Group and Graf-Martin Communications, Inc.  This is my honest review.
Posted by ~ Jenna ~ at 18:21 No comments: 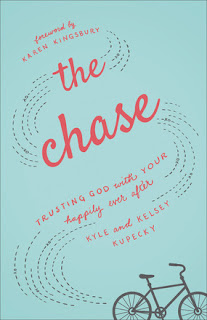 Only God could have written a love story as beautiful as Kyle and Kelsey Kupecky’s.  From their teenage days thousands of miles apart when they separately wrote letters to their future spouses, to a chance meeting backstage at a concert, their story brings inspiration and hope to every girl.

It’s easy to get impatient for the future to play out, especially when it comes to love.  Before long you find yourself chasing the perfect guy and trying to write your own happily ever after.  But the truth is, your best future won’t be found chasing boys—it’ll only come by first chasing God.

In The Chase, Kyle and Kelsey take turns telling their story—with Kelsey sharing secrets to a godly relationship and Kyle revealing the truth about what guys really think.  Together they’ll show you how to put God first, protect your heart, deal with the loneliness and peer pressure that comes along with purity, and see yourself as God does.

Are you ready to trust God with your very own happily ever after?  Let the chase begin!

It is so true that one’s relationship with God must be the first priority in your life.  When we can say that we truly trust God with our lives and seek His wisdom with decisions, then we do not have to stress about the outcome of our life – or if we will ever find our future spouse.  “He’s got the whole world in His hands” – what a beautiful truth!  Of course, it does not mean everyone will get married - some, like the Apostle Paul, are called to be single.  But when we are living our lives sold-out for God, He will satisfy our deepest hopes and desires, and at times, in ways we could never, ever imagine, but always for the better.

Each chapter in The Chase touched on some very key issues in relationships – from not compromising your values, to allowing the guy to initiate the relationship, what a girl wants (to be loved and cared for!) and what a guy wants (respect!), and staying pure.  It also ends on a very hopeful note – just because you aren’t married yet, doesn’t mean you never will be.  It could very well be that you haven’t met “the one” yet (and it well worth the wait!).

Well-thought out and equally well-written, The Chase would be a great book for every single girl to read.  As a single gal myself, I felt very encouraged reading Kyle and Kelsey’s story – and know I will take the constructive advice to heart.


Book has been provided courtesy of Baker Publishing Group and Graf-Martin Communications, Inc.
Posted by ~ Jenna ~ at 20:49 No comments: