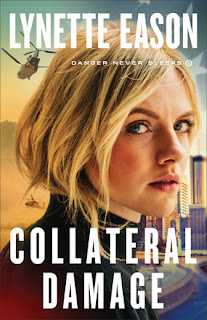 They thought they left the fight behind on the battlefield.
But their greatest struggles are just beginning.

Honorably discharged from the Army after an explosion nearly killed her, former military psychiatrist Brooke Adams has set up shop to help others, but her days of helping military personnel are over.  She's got her own battles to fight from her time overseas, and she's not equipped to take on more.

Former Army Special Ops Sergeant First Class Asher James could handle anything that war sent his way.  The only thing that scares him now is sleep.  As the shadows close in, the nightmares begin.

Finally convinced that he needs help, Asher makes an appointment with a counselor.  When he arrives at her office, she isn't there, but a dead body is.  When it becomes clear that Brooke was the real target of the attack - and that her secrets go even deeper than his own - Asher vows to protect her no matter what.

Collateral Damage is an explosive start to Lynette Eason's newest series, "Danger Never Sleeps".  From the first chapter, readers are taken on a wild ride from war-torn Afghanistan where anyone could be your enemy, to sunny South Carolina, where the terrors of war should only become a distant memory.  However, the danger didn't stay overseas, but followed Brooke and Asher as they enter civilian life.  Not only are they unsure of who attacked Brooke, they don't even know what it is her assailant is after.  All these factors result in a page-turning story with endless twists and turns!  I loved every word, every chapter, and was sorry for the story to end.  Suspense novels are my favourite read, and Lynette Eason hit the ball out of the park with this one.  Can't wait for Book #2!