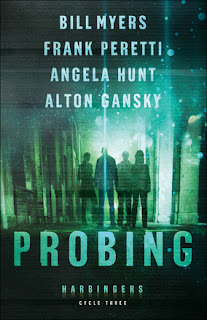 As evil lurks around every corner, this misfit team must work together if anyone wants to make it out alive.
The states are higher than ever as Bill Myers, Frank Peretti, Angela Hunt, and Alton Gansky return again to the universe of Harbringers for four more stories set in a world on the brink of destruction.
In Bill Myer's "Leviathan", the team heads to Hollywood for a taping of a new television pilot, Live or Die: The Ultimate Reality.  When violence and chaos erupt, they must fight an insidious and multiplying madness before it spreads across the globe.
Frank Peretti's "The Mind Pirates" centers on an earring with mysterious powers that just might hold the key to solving a murder.  When two members of the team are kidnapped by seventeenth-century pirates, the team must overcome the ruthless scheming of an evil, hidden nemesis.
In "Hybrids" from Angela Hunt, the arrival of two mysterious black-eyed children and a baby's disappearance are no coincidence.  Instead of finding the rest they need, the four friends must stay on their guard as they search for answers - and for a missing child.
In "The Village" from Alton Gansky, a visit to a guarded and secretive North Carolina town becomes the most challenging mystery the team has ever faced as they must jump between universes to solve a problem they barely understand before the window between worlds closes forever.
Review
Up for another round of creepy goodness?  Enter Cycle Three in the "Harbringers" series where four talented authors deliver four thrilling stories full of supernatural suspense and intrigue.
I've been a huge fan of the "Harbringers" series since the first novel, Invitation was released in April 2017, followed by The Assault in August 2017, and now we have Probing to add to the collection.  One of my favourite aspects about the series is the diversity of the authors' writing, characters, and stories.  You never quite know what to expect when you pick up one of these books!  The first two novels were home runs for me all around; however...I found Probing was a little of a mixed bag.  A couple of the stories I absolutely LOVED, and they reminded me of why I was crazy about this series in the first place!  However, two of the other stories fell a bit flat.  It was as if the "mojo" was lost and instead of delivering more intense, supernatural thrillers, the stories just poked along, and I was struggling to see how they were relevant to the over-arching theme of the series.
And on the note of the general theme of the series, given that while there may only be three books in the series, there are actually twelve stories, and I'm rather eager to find out more about the mysterious "Gate" and who the anonymous benefactor of the team is?  I hope some strong hints and clues will be revealed in the next book to keep the theme running!
All in all, I'm still very much a HUGE fan of this series and am eagerly looking forward to the next book!
Book has been provided courtesy of Baker Publishing Group and Graf-Martin Communications, Inc.
Posted by ~ Jenna ~ at 18:06 No comments: 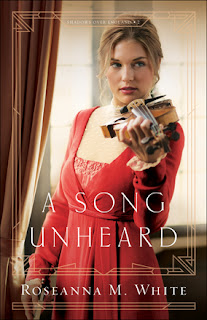 
Willa Forsythe is both a violin prodigy and top-notch thief, which makes her the perfect choice for a critical task at the outset of World War I - to secure a crucial cypher key from a famous violinist currently in Wales.

Lukas De Wilde has enjoyed the life of fame he's won - until now, when being recognized nearly gets him killed.  Everyone wants the key to his father's work as a cryptologist.  And Lukas fears that his mother and sister, who have vanished in the wake of the German invasion of Belgium, will pay the price.  The only distraction he finds from his worry is in meeting the intriguing and talented Willa Forsythe.

But danger presses in from every side, and Willa knows what Lukas doesn't - that she must betray him and find that key, or her own family could pay the same price his surely has.

This story gave me goosebumps!  But not in the creepy-I'm-so-scared-check-under-the-bed way, but in the this-story-is-amazing way!  I fell in love with Barclay Pearce's family of expert thieves in the first novel, A Name Known, and desperately hope there are many more novels to this series.  The adventures the characters face are filled with intrigue and danger and balanced out with the perfect blend of romance.
In A Song Unheard, Willa Forsythe is tapped by the mysterious Mr. V.  to locate and steal a cypher key to ensure it doesn't fall into the wrong hands.  Willa is the more "prickly" of personalities in the family and very resistant to showing her true emotions.  However, despite her best intentions, when she meets the Casanova-type Lukas De Wilde, sparks immediately fly, and she finds it difficult to keep the walls around her heart from crashing down.  Their budding relationship made for a delightful romantic diversion, producing a few very "sigh-worthy" moments.
As with the first novel, in A Song Unheard, I was enthralled with this intriguing story set during one of the most turbulent times in history.  The detailed research Ms. White puts into her novels does not go unnoticed as I felt transported into the story as if witnessing everything first hand.  From the culture and customs, war-time drama, etc., the setting was just terrific.
Simply put, Ms. White's "Shadows over England" series is one not to be missed.

Book has been provided courtesy of Baker Publishing Group and Graf-Martin Communications, Inc.
Posted by ~ Jenna ~ at 17:17 No comments: 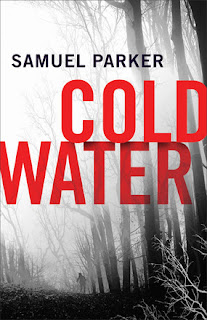 Back Cover
The vigilantes behind him are nothing compared to the enemy within.
Having forfeited his youth to the state prison system, Michael moved back to the still vacant house of his parents in a town with on stoplight.  A town that hated him.  Had always hated him.  And was ready to pick up where the prison system had left off.
Now he's on the run from men who've tried to kill him once; but Michael is more than an ex-con.  A powerful, sinister force skulks within him, threatening and destructive.  What--and who--it will destroy next is the only real question.
Review
Cold Water is an interesting tale.  To be honest, I'm not sure how I feel about this story.  On the one hand, it is suspenseful and spine-tingling as promised.  But it is also dark.  Similarly to Purgatory Road, there are elements to the story that left me somewhat confused as to why this book is coming from a Christian publishing company.  Frankly, I couldn't find any Christian elements in this book.  Other than the messages of forgiveness and mercy (along with the dark, thematic, supernatural elements), the story is missing the true source of hope and mercy - Jesus.  Cold Water leads readers to believe that just man himself can shrug off our inner darkness - our sin.  But what Christians know to be true - from what we read in the Bible - we know that is not the case. Only Jesus has the power to bring us to true repentance, save us from the bondage of sin, and grant eternal life.
Aside from misgivings about the spirituality of the novel, from a strict literary point of view, Cold Water does a great job of grabbing hold of the reader from the opening scene (which is very creepy and very effective!), not letting them go until the final word.  It is a taut, suspenseful journey that dives deep into exploring dark, human motives, and yet ends on a thread of hope.  There's no question that Samuel Parker can write good suspense novels.


Book has been provided courtesy of Baker Publishing Group and Graf-Martin Communications, Inc.
Posted by ~ Jenna ~ at 16:55 No comments: