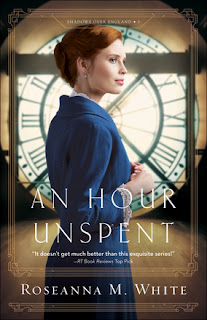 
With danger creeping ever closer, do their dreams still matter?
Once London's top thief, Barclay Pearce has turned his back on his life of crime and now uses his skills for a nation at war, including keeping an eye on a talented engineer working as a clockmaker.  But not until he rescues the man's daughter from a mugging does he begin to wonder what his future might hold.
Evelina Manning has constantly dreamed and worked for independence, but she certainly never meant for it to inspire her fiancé to end their engagement and enlist in the army.  When the intriguing man who saved her returns to the Manning residence to study clock repair with her father, she can't help being interested.  But she soon learns that nothing with Barclay Pearce is as simple as it seems.
As 1915 England plunges deeper into war, the race is on for any technological edge, and Evelina's father's ideas have captured the attention of many - perhaps too many.  As danger seems to encroach from every side, it may just take a reformed thief to steal the time they need to escape.


Roseanna M. White has quickly become one of my favourite authors.  She won me over with A Name Unknown, the beginning of her "Shadows Over England" series.  That novel was the introduction to Barclay Pearce and his family of thieves.  The first two novels in this series were of his sisters, Rosemary and Willa, and I was so excited for this novel - An Hour Unspent - to come out and tell the story of Barclay himself.  Other than knowing that he held a fierce love for his adopted siblings and is an excellent thief, Barclay's character and background always held a bit of a mystery.  An Hour Unspent peels back those layers and the result is as intriguing - albeit heart-breaking - as expected.  It's hard not to cheer for Barclay and that he be able to embrace his own sort of happy ending.  And it is his story that best concludes this wonderful series.
Set in a time when the world is in turmoil, the setting itself lends a healthy dose of tension and many possible avenues to introduce more than a few mysteries and dangerous situations. From the constant threat of zeppelin raids, to the ever-present worry if the person next to you is a spy, life in a time of war was not an easy feat.  It makes it hard to continue a life of normalcy when your windows are covered in black crepe and the presence of soldiers in the streets is a common occurrence.  And while living in these conditions would be hard enough for an ordinary citizen, Barclay goes one step further in enlisting in active service for the Crown.  His former skills as a thief come in handy on his various missions for the Crown, and he is ready to employ those skills yet again as he meets with Mr. Manning to investigate his latest invention that promises to greatly aid England in the war effort.  Throughout his various visits with Mr. Manning, he becomes more than intrigued by the clockmaker's lovely daughter, Evelina.  The attraction proves to be mutual, but before their relationship can take flight, someone goes missing under mysterious circumstances, and it is up to Barclay to launch a rescue mission on the other side of the battle lines before it is too late.
The combination of history, romance, and suspense collide in An Hour Unspent.  The plot is nothing short of intriguing and the romance can only be described as sweeping which result in a fantastic read.  I will be eagerly anticipating Ms. White's next work, The Number of Love, book one in her new series, "The Codebreakers", scheduled to come out in June 2019. 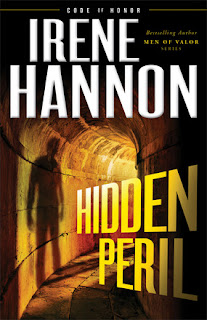 
The most dangerous enemy is the one who has nothing to lose.

As teenagers, Kristin Dane and her two best friends took a vow to make the world a better place.  Twenty years later, she's fulfilling that pledge through her fair trade shop that features products from around the world.  All is well until, one by one, people connected to the shop begin dying.

Detective Luke Carter, new to the St. Louis PD, wants to know why.  Before he can answer that question, however, the FBI weighs in and Kristin suddenly finds herself in the middle of international intrigue - and in the sights of the ruthless mastermind behind an ingenious and deadly scheme.  Can this coldblooded killer be stopped before more people die...including Kristin?
Review
Sigh.  I love Irene Hannon's novels.  They are so good that one of the hardest tasks after finishing one of her books (other than sadly coming to terms with the fact that the story is over), is choosing another book to read.  Not much matches her level of expertise in writing romantic suspense.  So if you are looking for an expertly written suspense with a well-thought out plot and excellent characters, look no further than Hidden Peril.
Kristin Dane completed time in the peace corps, so she is no stranger to danger.  But what she doesn't expect is danger to come to her now - and especially in the terms of a murder, which happens right in her fair trade shop of all places!  It's baffling to her to consider what sort of intrigue or criminal intent could be intertwined to her and her shop.  And the crime doesn't stop with one murder - before long, another person is found dead, outside of her shop, but with a tenuous connection to her and WorldCraft all the same.  Even while she is usually someone who is calm under pressure, these events have her more than rattled, and beginning to wonder if her own life might be in danger as well.
Detective Luke Carter is not only surprised by the mysterious events surrounding WorldCraft, but also by his strong attraction to Kristin.  While he does his best to keep a professional distance, his attraction makes it harder to keep a level head about the investigation as it becomes clear that a woman he cares about may become the killer's next target.  It's a race against time in a cat-and-mouse scenario that will end in a taut climax only Ms. Hannon can write.
Hidden Peril is thrilling ride that I finished reading in record time (it's amazing how much "extra time" one can find to read when they have an excellent book in their hands).  I thoroughly enjoyed the continuation of the "Code of Honour" series and look forward to the next story!


Book has been provided courtesy of Baker Publishing Group and Graf-Martin Communications, Inc.
Posted by ~ Jenna ~ at 14:47 No comments:

The Cost of Betrayal 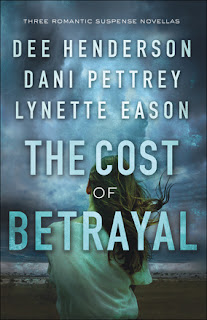 Faith will be tested.  Trust Shattered.


After serving six years of a twenty-ear sentence for a murder she didn't commit, Janelle Roberts is finally freed.  But the truth is still waiting to be discovered, and a murderer is still at large.  Janelle needs to be somewhere safe with someone she can trust.  She may not survive another act of treachery.

Tennyson Kent is trapped on the isolated island of her childhood by a storm surge, and she is shocked when the typically idyllic community turns into the hunting grounds of a murderer.  Cut off from any help from the mainland, will she and first love Callen Frost be able to identify and stop a killer before they become the next victims?

When Detective Isaac Martinez lands in the ER with a gunshot wound, he pulls through thanks to trauma surgeon Ruthie St. John.  But as the witness to a crime and possible corruption, Martinez is at risk from someone intent on silencing him - and those around him - forever.  When he barely survives another attack while recovering, both he and Ruthie must flee, trying to outrun deadly killers while locating the evidence they need to end the danger.

What a smashing group of stories!  Arguably three of the current top ten writers of suspense, Dee Henderson, Dani Pettrey, and Lynette Eason come together to bring readers to the edge of their seats once again in three thrilling stories.
Dee Henderson kicks things off with "Betrayed".  Written in her typical style of detailed, thought-provoking, analytical writing, Ms. Henderson's favourite characters, Ann and Paul Falcon, stumble onto a murder case that was presumably wrapped up and finished years ago.  All it takes, however, is for one small piece of evidence to surface for Ann to wonder if there had been a miscarriage of justice.  Ann's justice-seeking nature is unwilling to let the matter rest until all stones have been overturned.  And while her suspicions prove correct, it could spell danger for Janelle Roberts, whose newfound lease on life may be cut short should the real killer decide to silence her once and for all  Consisting mainly of dialogue in this character driven plot, "Betrayed" is not as much of a nail-biter as some of Ms. Henderson's previous works, but the tension in this story is palatable, and I was never sure of how the story would end until I turned over the last page.


Dani Pettrey keeps the ball rolling with "Deadly Isle", as an island that was once seen as one of refuge, turns deadly for Tennyson Kent.  As the owner and of the founding family of Talbot, she has a higher duty than most to ensure the safety of every citizen on the island.  But the danger doesn't stop with the murder that occurs in the opening pages of the story.  Dangerous events and attacks ensue until it becomes clear that the killer has an additional target in mind.  Nearly every chapter in "Deadly Isle" ends on a cliff-hanger note, compelling the reader to read "one more chapter" to find out what happens next.  The inclusion of romance in this suspense was nicely done as it wasn't so much a budding love story as it was a re-kindling of a previous relationship, so as it didn't feel too forced or too fast.  As there were a number of different potential suspects, I really appreciated the fact that the ending tied up all the loose ends and left no question unanswered.
Lynette Eason arguably had the hardest job in closing out this three-story compilation on a high note.  Not surprisingly, she executes the job perfectly with "Code of Ethics".  A short story spin-off of her "Blue Justice" series, this novella follows Ruthie St. John, the "black sheep" if you will, of a family of law enforcement personnel.  Unlike her parents and siblings, she chose the medical field as a career option - and of course, works in the high-stress environment in the ER where anything can happen.  Still, she isn't quite prepared for when Detective Isaac Martinez comes into her care after a shootout.  It quickly becomes obvious that Isaac is the target of someone - or someones - as he harbours evidence that could put corrupt individuals away for a long time.  Ruthie is unwilling to let her injured patient, who is barely able to even walk without assistance, fight this battle on his own.  She is pulled into the fray and it becomes a race against time as they actively seek enough evidence for an arrest and stay alive at the same time.  This story was a white-knuckle of a ride and highly enjoyable.  After devouring the last page, I promptly checked out book one in Ms. Eason's "Blue Justice" series as I want to read more about the St. John family!
All in all, The Cost of Betrayal would make an excellent addition to any suspense reader's library.  Three very different stories which wonderfully exhibit each author's unique styles, The Cost of Betrayal compels the reader to keep reading long into the night...and leaves one hoping for another compilation of these wonderful suspense writers.

Book has been provided courtesy of Baker Publishing Group and Graf-Martin Communications, Inc.
Posted by ~ Jenna ~ at 14:16 No comments: